Reminder to all Oklahoma Sooner fans of the greatness of Leroy Selmon and his two brothers, Lucious and Dewey.  As much as the great Heisman Trophy winners are honored by the University in the “Heisman Park”, the three Selmon’s from Eufulala, OK have been overlooked and they too need a statue in their honor somewhere on the campus in Norman, too.

Anyone that wants to argue that Leroy Selmon was not as great an Oklahoma football player in the history of the school, including those honored with statues in OU’s Heisman Park would be just plum crazy.  Many will argue that number 93 was the greatest Sooner ever to play, football or any sport at the school.  Add the fact that brothers Lucious and Dewey were just notches below Leroy on the ability continuum, and that all three started on the defensive line in 1972, the university needs to recognize all three with their own statue.  OU was in fact 54 wins and 3 loses with a Selmon on the field.

Will OU Athletic Director Joe Castiglione ever see the light and make the move before Dewey and Lucious take there place with Leroy in the hereafter?  Deserving, the brothers need to be recognized as much as any Sooner players, and that honor needs to take shape, “sooner” than later. 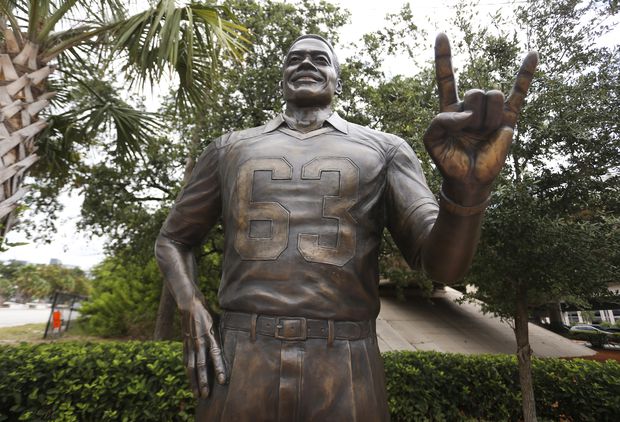 Tampa Bay honors Leroy Selmon with statue…OU, what are you waiting for? The new Lee Roy Selmon statue at the corner of E, Brorein St. and Florida Ave. in downtown Tampa on June 7, 2019. (DIRK SHADD | Times)