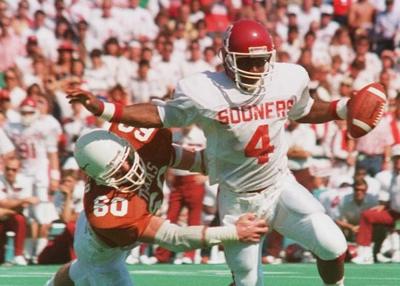 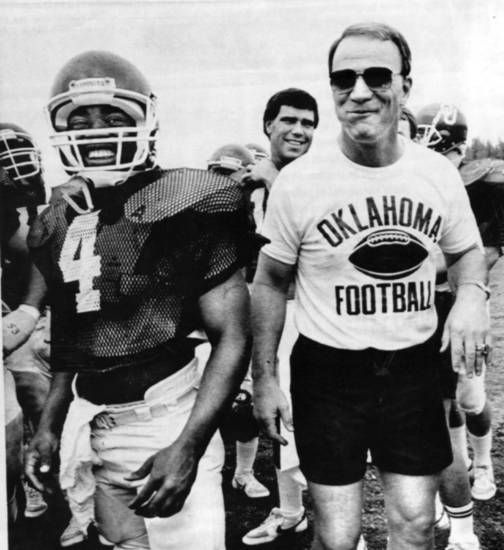 Yes, Holieway did not get to start all the games in that four year stretch (1985-1988), yet he was totally comfortable running the wishbone, making the correct decisions, as OU rolled most all of the teams they played.  Holieway was dangerous keeping the ball and with the best tight end in the nation in Keith Jackson, he was also deadly getting the ball to the man from the state of Arkansas.  OU won big with Holieway and his play was the key.

As a true freshman, Jamelle Holieway started the final eight games of the 1985 season after starter Troy Aikman was injured with a broken leg.  With Holieway, OU won the rest of the games that season, beating Penn State in the Orange Bowl.  The win and the loss of some higher rated teams that bowl season gave OU it’s 6th National Title.  OU finished 11-1 and another Big Eight title while going 7-0 in conference.  Holieway was the 2nd leading rusher for the Sooners, gaining over 800 years on the ground with nine rushing scores and a five yard rushing average.  He threw for five scores and had only two interceptions.  Efficient, Holieway was the first true freshman to lead his team to the National Title. Make no mistake,Holieway was the key player for OU on offense to win in 1985, with respect to Keith Jackson.

In 1986, Holieway continued his dominance as a sophomore quarterback as OU went 11-1 again, losing only at Miami in game four.  This team was, in my opinion, better than the 1985 team as the Sooners ran roughshod over their opponents, with only Nebraska coming close but losing to the Big Red of the South 20-17 in Lincoln.  OU smashed Arkansas in the Orange Bowl 42-8 in finishing a very respectable number three in the final national polls.  Holieway had over 800 yards rushing for the 2nd straight year, scoring ten time rushing the ball.  His average per rush went up to 5.5 yards.

Holieway was injured in the final three games of the 1987 season and did not play in the Orange Bowl loss to Miami.  Holieway was again efficient as he gained over 800 yards for the third time and his average per rush was just a nudge over six yards a carry.  The end of the season, Holieway’s record as a starter for OU was 28-1.  OU finished third in the polls.

Holieway’s senior put him behind Charles Thompson as of his injury in 1987 but he started the bowl game that year in a loss to Clemson.  Holieway was productive for three seasons and was 28-2 as a starter with a National Title, three Big 8 Championships, and never lost to Texas.