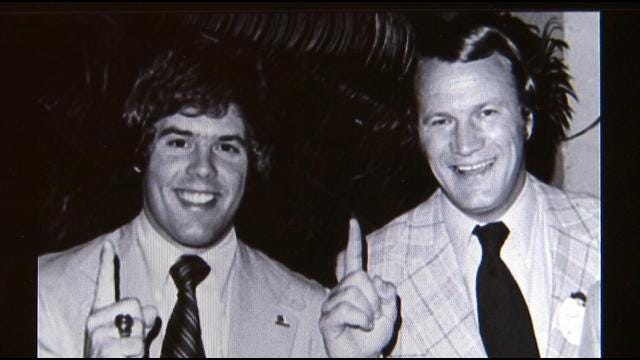 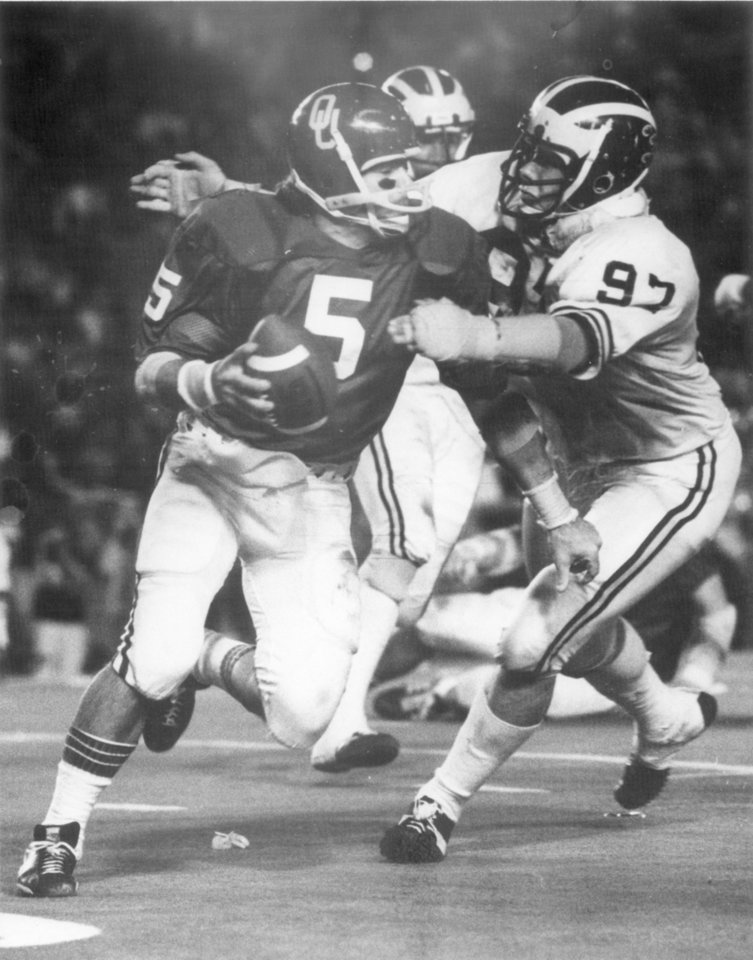 The winning-est starting quarterback (according to the NCAA) in the history of college football at the highest level, Steve Davis could be considered the best ever at OU.  But as of his abilities, the players on his team (offense and defense), and the greatness of the position in Norman, I have Davis ranked as the eighth greatest I have seen (from 1961 through today *).  Do not consider this a knock on Davis as a winner or leader.  He was in every respect.

Even in the bottom half of my Top Ten, I considered him much higher, as of that winning percentage and the fact he led the Sooner offense to balance with the great defense in ruling the nation in the early to middle 1970’s.  His taking OU to back-to-back National Titles is not chicken salad.  Make no mistake about Steve Davis. Number Five on the field in his career was Number One in the winning attitude that defined the Sooners as they won 32 games, lost only one, and tied the defending and favored National Champs in that 7 to 7 battle in the LA Coliseum with the Trojans of So Cal.

Davis came to the Sooners (from Sallisaw, OK) as a player that might never see the field as of the talent and numbers of bodies OU had at the quarterback position in the fall of 1971.  It was a fact that OU head coach Chuck Fairbanks was not one to believe that Davis would ever be the man running his offense. Assistant Leon Cross was the one that got Davis to OU when Clyde Crutchmer of Okmulgee (OK) decided to attend Colorado and a scholarship opened up for him at OU.  Freshmen ineligible, Davis found himself at the bottom of the depth chart in Chuck Fairbanks great season of 1971.

The 1972 season confirmed the Big Red of the South as a perennial powerhouse team. Coming off the 1971 season where they finishing 2nd in the country, losing only to Nebraska in the real Game of the Century, and beating Auburn in the Sugar Bowl, the second coming had arrived.   In 1972 Fairbanks would end up playing an under-rated senior signal caller in 1972 in Dave Roberson, and the team had another fine year, going 11-1 and winning the Big Eight conference.  (I will not address the Kerry Jackson issue here-if you have no knowledge of it, do your own research as it is worth a look).  The number two position in the country after a Sooner win in the Sugar Bowl over Penn State was the end of the Fairbanks run as their head coach.  1972 led into even greater seasons for the Sooners.  Never think Fairbanks was not important in Sooner history. He was, in spades.  But his successor would take OU to the top of the football world.

Barry Switzer, the best recruiter on the staff and the coach that persuaded Fairbanks to run the wishbone offense,  was called on to lead OU in 1973 (after two back-to-back National runner ups).  Not only winning but “winning big”, routing opponents with historic offensive performances,  was going to continue on Owen Field. With Davis being red-shirted in 1972, he ran the scout team and became a player that might get some PT in 1973 or later.

The fact that Davis learned the offense during that 1971 and 1972 seasons, the former 8th string quarterback got the eye of Switzer as he displayed a knack of making the correct decisions required of a wishbone quarterback.  With Davis being red-shirted in 1972, he ran the scout team and became a player that might get some PT in 1973 or later.  The Kerry Jackson issue pushed Davis into the starting role against Baylor in Switzer’s debut as head coach.  OU pretty much did not look back.

A sophomore with zero game experience, yet the total confidence of Coach Switzer and offensive coordinator Galen Hall, Davis, with the exception of a mediocre tie game with USC and the loss to Kansas in 1975, always celebrated victory after every game.  OU would a five year dominance in college football, losing only three games from 1971 throught the 1975 season, with that one tie in Los Angeles.  Nebraska, the best team in 1971 beat OU, Colorado did the trick in 1972 in Boulder, and Kansas also got some Sooner blood in 1974.  That OU loss in Norman to KU was Davis’s first loss and the fact that the offense sputtered was blamed on the complete offensive team, as OU had eight straight turnovers in the 2nd half of that game.  One must not forget that from 1971 through 1975 OU lost only three games with the tie and won two national titles with three other times finishing 2nd in the polls.

During his thirty-four game career as the quarterback for OU, the Sooners won 32 games out of 34 with that only loss to Kansas.  That day in the stands of Memorial Stadium that overlooked Owen Field, the Sooner Nation booed Steve Davis when he entered the field on OU’s last possession. That I will never forget.  On that day Davis made it known that he would never play for the fans, but for his fellow players at he took the field. He was disgusted with those that booed.  I did not, sitting in my seat in Sec. 161.  It was the worst display of fan behavior I have ever been a part of.

With the great running backs at his disposal, Davis ran the “Bone” as good as any at OU with regard to decision making.  Davis was not extremely fast, was an average thrower, but made the correct decisions in keeping, pitching, or handing off to the fullback. Not the runner that Thomas Lott, nor the passer of Jack Mildren, yet as effective as any.  His Sooner teams fumbles a lot and it was not as much as a bad decision but the high risk of the offense.  With little risk Davis would not have great success with Pruitt, Crosswhite, or any other player he would give the ball to.  He was not a super-star player, just a winner. And most definitely, Steve Davis was a leader, on and off the field.  Never forget that Sooner fans.

To qualify this ranking of quarterbacks at Oklahoma, I have included only players that I have personally seen in person at the stadium or live on television.  I began watching Sooner football in 1958 and my remembrances go back to 1961.  With that, I have not included any player before 1961. This is the second part of a series of greatest Sooner football players by position. You can find my list of best running backs at this blog in the search box and the post will pop up).  Please comment on my lists and argue your best Sooner players.  There are no right or wrong rankings.  Statistics, abilities, awards, accomplishments and overall significance to the OU football program are all included in picking the ten, but when all things are equal, my personal preference is the tie breaker.  I have a specific rating for each quarterback and will publish the total point list when I have finished with my top OU quarterback later in the year.