My dad, Fred Pahlke Sr., graduated from Classen High School in Oklahoma City where he was a two sport starter on both the Comet’s basketball and football teams (1938).  He played guard on the hoops team and was a 6’0   160lb back on the gridiron.  As a football player, he started his senior season as the feature back on one of the largest and best high schools in the State of Oklahoma. As of a newspaper article in the Daily Oklahoman, my Dad was a running back that would rather run over a defender than around him, his coach Leo Higby would say.. After a couple of games he was moved from the halfback position to the lead blocking back, a position that is still referred to as the “fullback”. My Dad was also the primary kickoff returner and had a few significant kickoff returns in his final year.

After graduation my Dad was offered a scholarship in both basketball and football at Centenary College in Shreveport, La.   Freshmen were not allowed to play on the varsity. He was slated to play a significant role on the 1940  Centenary varsity football and basketball teams in his 2nd year as a Centenary Gent.  War in Europe broke out and my  Dad enlisted in the Army in the Summer of 1940, where he played football with other college players for a major Army Division team. The team was scheduled to play a Army Championship game in the the famous Sugar Bowl Stadium when he was shipped out to fight in North Africa after spending two years playing football and training in the medic corps of the 45th Division of Patton’s Army.

Today, Centenary College doesn’t play football, but did play a good schedule when my father went to school there. The 1939 team played a schedule including Texas A&M, Rice, Ole Miss, Tulsa, Texas Tech, and Baylor.  The team that my father would have taken the field for in 1940 finished only 3-7, but again played a nice schedule that included a road game in Tucson against the Univ. of Arizona.

As much as my father liked to play sports, he gained more satisfaction fighting for the 45th Infantry which was a part of General George Patton and  Major General Mark Clark’s armies.  He was an experienced medic with great training and was also fluent in German as his father and mother were of German heritage. He had great love and respect for those two great American Generals and found it an honor to be in the 45th Division, participating in the battles of Sicily, Salerno, Anzio, the liberation of Fance, and invasion of Germany. My dad suffered  war injuries in battle just before he crossed the Rhine River.  He thought of the “war years” as the most important and exciting years of his life and was thankful for being able to save many lives on the battlefield, American and German soldiers alike.  From my Dad’s recollection, as he was fluent in German, he could conversate with the wounded of the opposing army in their time of need.  As of military orders, the medic would attend to the most needy first if it would not have dire consequences for American wounded, so he saved German lives also.   He told me he heard the last words of German soldiers as they passed. I think of the medic in the movie “Saving Private Ryan” when I see that film, knowing the deadly battlefield he had to endure in those places in Italy, France, and such.   He was a member of America’s “Greatest Generation.”

My Dad with his Mom and Dad in 1946 after a year in a military hospital from his injuries suffered in action against the Germans as a medic in the 45th Infantry Division. He was injured just a day before they crossed the Rhine River into the Fatherland. He always told me it was an honor to fight in General Mark Clark’s army under General George Patton as the field leader 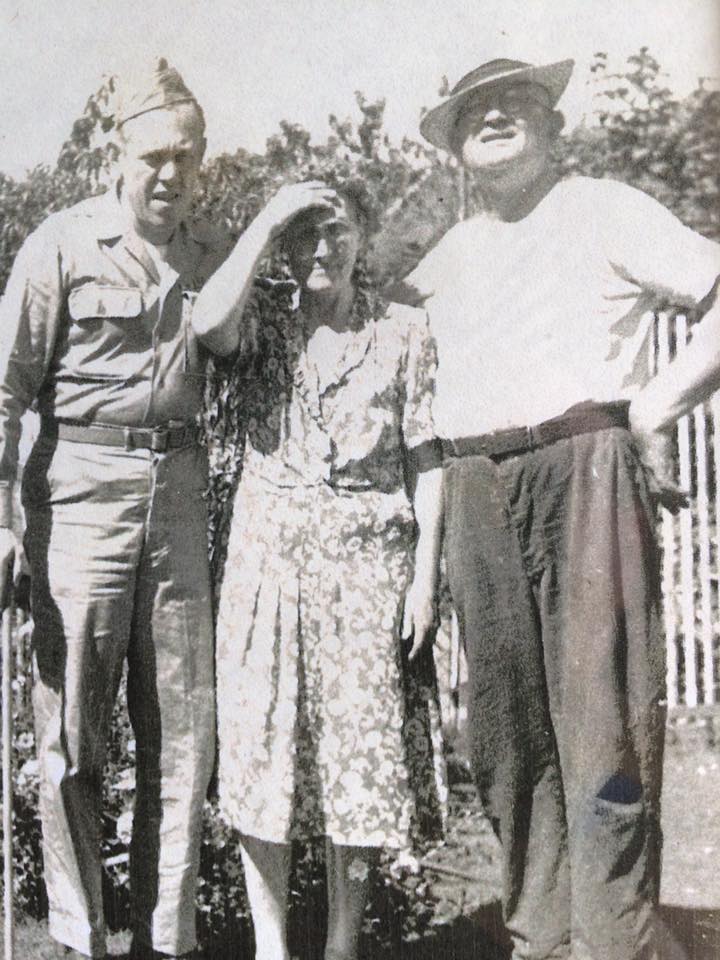 In the pic above you cannot see it but my Dad was on a crutch (right hand).  He is standing with my Grandmother Sophia and my Grandfather William.  I totally loved my Grandmother as she was the kindest woman there ever was.  As for my Grandfather, he loved me but he sure was not a nice person to be around.  We are what we are I guess.

My Dad always had problems with his back and walking. The war took ten years of his life. He went from a college athlete in 1940 (two sports, basketball and football at Centenary College (La) to basically a crippled man that could never run again. But he always told me that his years in the US Army were his most fulfilling and exciting and so worth it. He loved his fellow soldiers until the minute he passed in the Veterans Hospital in OKC. He would not have wanted it any other way.