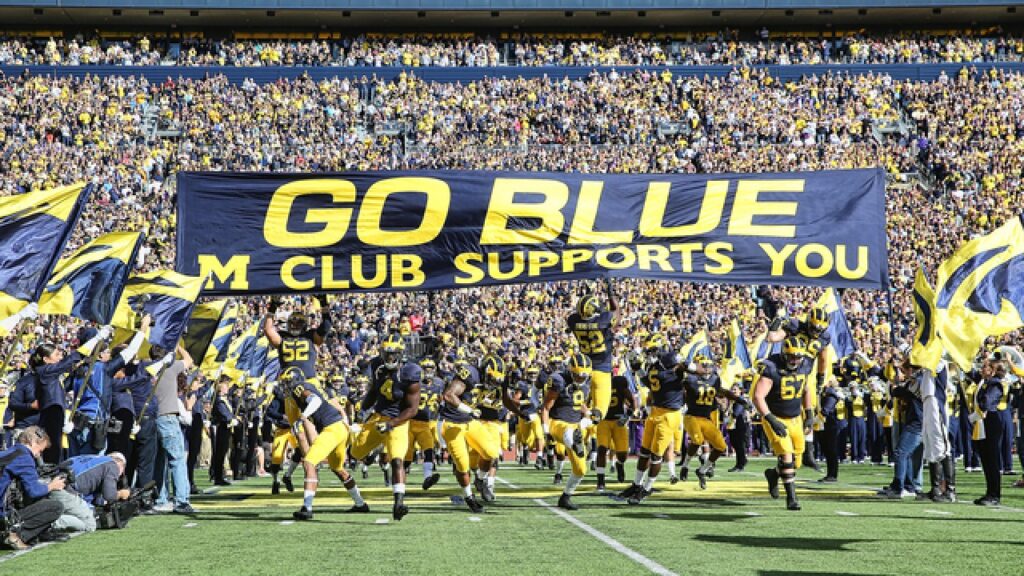 ANN ARBOR, MI – OCTOBER 10: The Michigan Wolverines enter the field prior to the start of the game against the Northwestern Wildcats on October 10, 2015 at Michigan Stadium in Ann Arbor, Michigan. The Wolverines defeated the Wildcats 38-0. (Photo by Leon Halip/Getty Images)

Sooner Nation and all Big Twelve fans, SEC fans, and all college football lovers from the other teams in the Big Ten, thank your college leadership as you have a strong chance to have football in 2020.  The players will report in time to prepare for a season, the kids will report to the campuses and attend some sort of class, and maybe some stadiums will have a semblance of human activity in the seats to view the contests.  Television might be the means to view the games this year with limited or no fans in the stadiums.  That is something that we could have to live with.  It is what it could be.

Almost all schools in the Power Five Conferences are setting the stage for football to begin this summer with the report of players. Some in a few weeks, others, like Oklahoma, on July 1st.

But Wolverine fans from the University of Michigan, from your President, it looks like you are in for a dry season in Ann Arbor.

Michigan president Mark Schlissel has told the Wall Street Journal that his school will not play this fall unless all students are back on campus for classes. Schlissel added that he has “some degree of doubt as to whether there will be college athletics [anywhere], at least in the fall.”  If the students are not back the players are not welcomed either.  How do you like that Coach Harbaugh?

Schlissel is currently calling the shots on the Ann Arbor campus and students have not been told if and when they can return to the University for classes.  The issue is still in limbo as of the return, but the two most likely things to happen are a late return in September 2020 or semester of on-line classes only, meaning no return before the new year.

According to President Mark Schlissel, football and school on campus is not a sure thing.  And do not dismiss that a return to campus for other schools could snowball into a disaster later this summer if a team gets a breakout of virus that infects many.  The domino effect could snowball into a complete cancelling of the season for all of the college game in all sports.

A immunologist by training, Dr. Schlissel expects to make a call in the coming weeks on what the new school year will look like for the prestigious public university, which has about 46,000 undergraduate and graduate students and a football program that is a perennial powerhouse.

Knowing eggheads such as Schlissel, and with this man deep in the subject of the day with regard to the virus, heed his warning about what will happen in the coming months.

Do not dismiss what he is saying  But remember, money and greed control college athletics, most especially football.  Will Schlissel be allowed to carry out his directives or will the money men and women at Michigan tell him to take a walk? Will Michigan be the odd college out of the norm?

Feature photo:  Oklahoma quarterback Jalen Hurts (1) celebrates as time expires on a victory over Texas in an NCAA football game at the Cotton Bowl on Saturday, Oct. 12, 2019, in Dallas.(Smiley N. Pool / Staff Photographer)