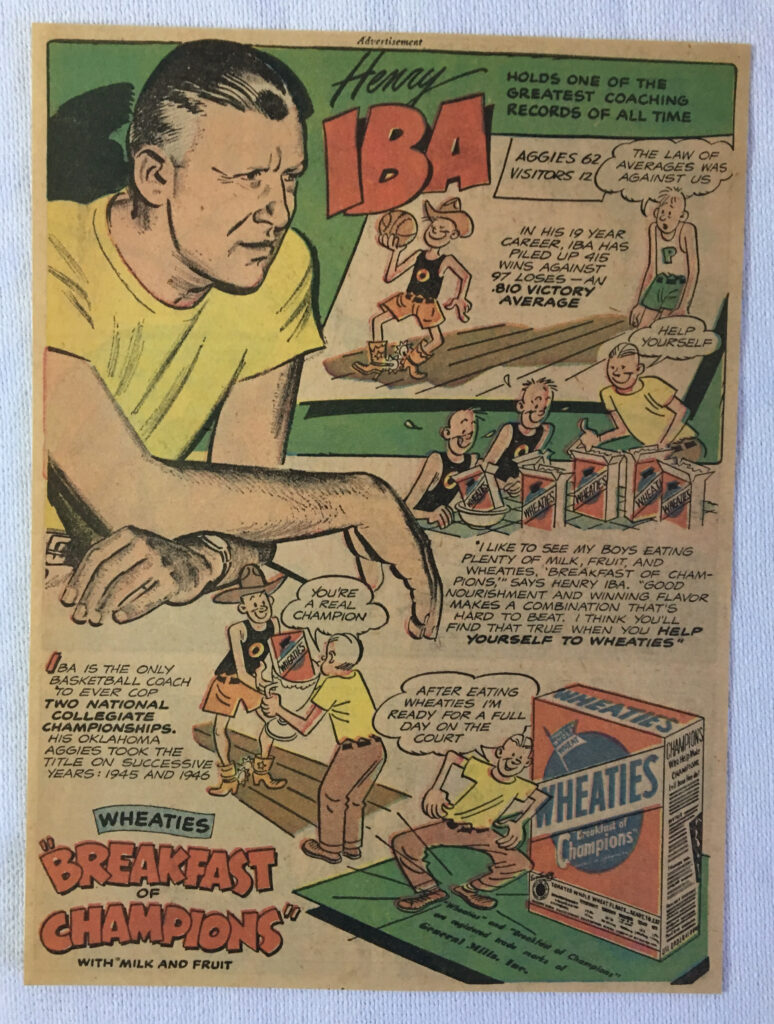 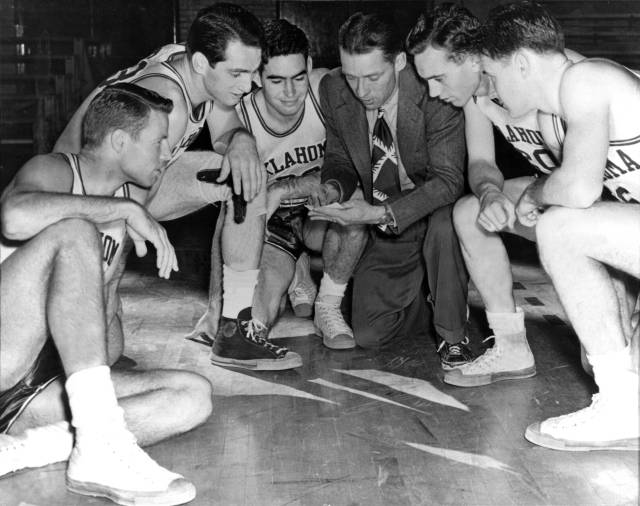 Yesterday, Berry Tramel, lead sports writer for the OKLAHOMAN, the daily newspaper for the state of Oklahoma, wrote a highly interesting story about the relationship between two of the best basketball coaches that graced the sidelines of the college game.

Henry Iba, the head man at Oklahoma State (formerly named Oklahoma A&M), and Bruce Drake, the Oklahoma Sooners head coach were not only the best in the state but also in the nation.  OU and O-STATE were two of the top programs in the country in the 1940’s and early 1950’s. The story by Mr. Trammel can be found at the link below you can read if for yourself if you wish.

I am blogging on these two coaches as of my personal interaction with my Uncle John Pratt, the former head high school basketball coach at Midwest City High in the central Oklahoma town of the same name.  From his telling, Uncle John was a student at the Univ. of Oklahoma in Norman and was getting ready start his junior year. He did not play sports for the Sooners but was highly interested in both basketball and football and had developed a “teacher/student” relationship with both Sooner basketball coach Bruce Drake and head football coach Bud Wilkinson. He was a war veteran and somewhat older than an average student just out of high school.

My Uncle had taken some classes from both Mr. Drake and Mr. Wilkinson at OU and my Uncle was pointing to a coaching career after graduation.  With his college major of history and teaching, he hoped to land a teaching/coaching job in a high school, sooner than later.  A highly intelligent and personable person, my Uncle. understood that “who you know” can make a difference in getting a job in a chosen profession and that relationships with powerful people can get you ahead of others in life pursuits.

That summer following his sophomore year at OU, Uncle John approached Coach Drake as he was seeking a spot as one of the Sooner student assistants for the basketball team.  At the time, a student assistant was basically a student enrolled at the university and would be a sort of step-in-fetch-it for the coach.  He was considered part of the team, sort of a lessor graduate assistant, but a valuable clog in the daily running of the program. The student assistant was required to be at every practice, make every game (road and home), be at every coaches meeting (except for being at class), and be a primary statistician (on the bench), taking the “books” of each game.  He was in fact an unpaid assistant coach and was treated by all, players and coaches, as a member of the basketball staff.  What they did at OU was the same at OSU and other schools.  A student assistant would often lead to becoming a graduate assistant upon graduation.  A graduate assistant for a sports team had perks at the time and was a highly wanted position, especially in the better sports programs in the country.

In the meeting with Coach Drake, my Uncle was told that he did not have an open position for him as a student assistant, but he did know that Mr. Iba at Oklahoma A&M might have one and that he would telephone him to inquire about a possible spot.  My Uncle was pleased to hear that and a day later Coach Drake called John to tell him to get in contact with Mr. Iba.  Coach Drake had told Mr. Iba about my Uncle and how he was a young man with integrity and high morals and that he would have put him on if he had a place for him.  I guess that was all Mr. Iba needed as a recommendation for my Uncle. An appointment with Mr. Iba in Stillwater the following day was made and that interview went well for both.

Mr. Iba offered my Uncle a spot as a student assistant and my Uncle, a born Sooner (from Paul’s Valley, OK), became an Aggie for life that day. My Uncle will tell you that even though he was a graduate of A&M (two years later), he would always be a Sooner as of his love of OU football and Bud Wilkinson.  He was loyal to both schools and never took sides except for two events. He would always pull for the Aggies in basketball over OU and he always pulled for OU in football over the Aggies/Cowboys.  My Uncle’s loyalty to “people” such as Mr. Iba and Coach Wilkinson were paramount in his favoritism of friends over love of school.  Yes, he loved both OU and OSU, but people always came first.

My Uncle lived the rivalry between Coach Drake and Mr. Iba. It was intense.  But as gentlemen, it was not personal, and was limited to the sport and not something that would ruin them as men of fidelity to the game first.  Yes, they could get heated on the court, but that never carried over outside the lines.  Coach Drake’s call to Mr. Iba concerning my Uncle was testament to their relationship.

My Uncle spent three years at on the bench and viewed the OU/A&M game up close.  He saw the fire of Mr. Iba, felt his terror on his players, but also knew that Iba’s players would never question what they were told to do.  His final year with Iba he was a graduate assistant as he worked on his masters degree at Stillwater.  My Uncle finalized his masters at Colorado State University in history.  His masters thesis was on a soldier of the Civil War, a true to life fighting man of the conflict.

With the recommendation of Mr. Iba, Uncle John was hired as the head basketball coach at Midwest City High in 1951, where he spent the next 23 years, forging a career as he had wished, teaching history, drivers ed, and coaching the team he built from scratch. He was just 26 when he took the job, a veteran of World War 2, fighting the Imperial Japanese Army in the South Pacific, and three years as an Iba disciple, learning his system of winning basketball.

His first year at MWC his team won four games.  His highly successful run was jump started in year two and the IBA system finally clicked and the Bombers won 20 games, starting a highly successful run.   He was named to the Oklahoma Coaches Hall of Fame from his years at MWC.  He is noted for never getting a technical foul in any game he coached, something he was proud of.

HIs teams won more than they lost, playing in the State championship game against Northwest Classen in the 1965 in the highest classification, losing to the Knights.  The IBA style fell out of vogue and that told my Uncle to retire from the the coaching profession and move into administration in the Mid-Del system, which he did.  In all, he won 325 games.

Not that the IBA system was not winning ball, it was a style that was not conducive to getting the best athletes to play the sport in the early 70’s, especially at MWC.  My Uncle John was too much like Mr. Iba in how he ran his program and that also turned kids away from playing for him.  What happened to Mr. Iba also happened to John Pratt.   My Uncle was a disciplinarian first, second, and last.   That was not what the kids of the early 70’s liked or catered to.  It was what it was.  My Uncle’s players became men first.  They learned what was most important in life.  That was just too hard for many young men of the day. They learned a work ethic, a respect for their elders, a true way to live your life with morality and fidelity. 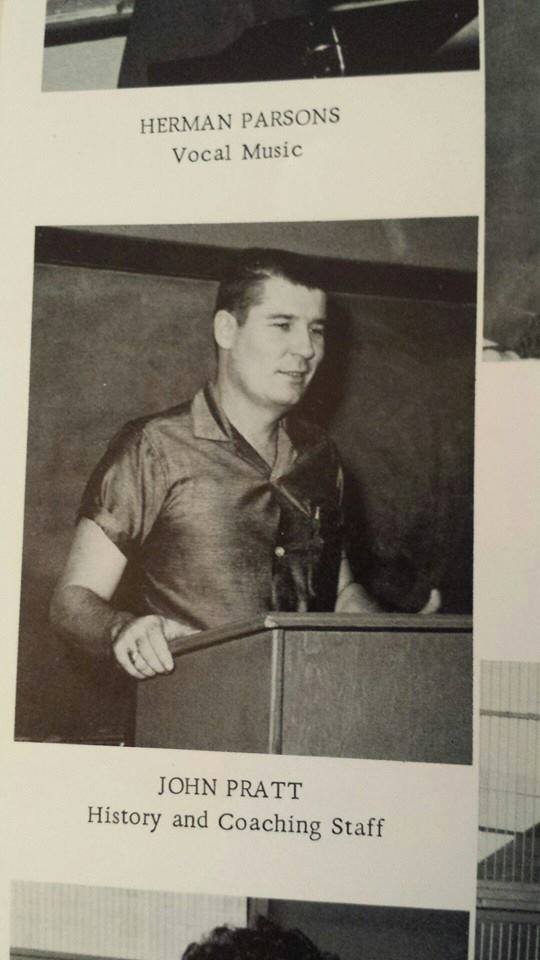 4 Responses to “My Uncle John Pratt and Coach Drake, Mr. Iba, and this is his story………”