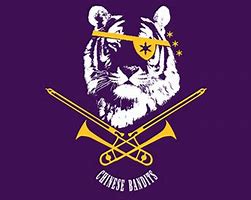 I grew up in a northwest downtown neighborhood a mile from the center of Oklahoma City.  My years in this now mostly commercial area of OKC were from my birth in 1953 until my family moved to the Shepperd Mall area in 1964. My prize possessions were anything that had to do with sports or war.  And  I loved football from the beginning.  My first remembrances of the games were of my family’s favorite, the Oklahoma Sooners.

But as a little guy of eight in the year of 1961, I had another favorite team that I was not able to view but could listen to on my small turquoise box table top radio that sat on the bed stand in my room.  Living in the upper two apartments of a two story quad-plex that my Dad had built before my birth, remember laying in bed listening…to football.  Every Saturday night I would turn on that radio and listen to college football on the radio.  And it was one team that caught my attention.  I would be able to pick up the LSU games that they played in night.  The station coming out of New Orleans was one of those superstations of the time that I could pickup in OKC. Matter of fact, there were no other football games on the radio on a Saturday night.  My Sooners would play almost all their games, in Norman or on the road, with a one o’clock PM start.  Football on TV? Are you kidding? 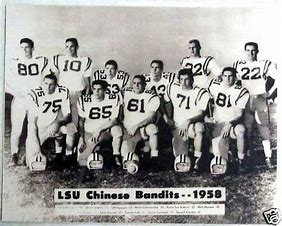 In 1961 LSU lost one game and finished 10-1 winning the Orange Bowl.  They had a great defense that year, nicknamed the “Chinese Bandits” and they were the best thing on the radio in that year.  The nickname began in 1958 and the Army football team also used that title for a time.  It would not be PC in today’s society.  But for the day, yes it was what it was.  They, the Tigers finished 3rd or 4th Nationally, depending upon which poll you followed, and tied Alabama for the SEC title.  They were Orange Bowl champs with a win over Colorado of the Big Eight.

These memories are old, but I still think of these nights.  I fell out of any love for LSU as I grew into a man and today do not consider myself an LSU fan. But I will, for one night, pull for LSU to win the National Championship.  I do not have any want of Clemson winning another title for a while.

6 Responses to “For a young Sooner fan it was LSU, a small box radio, and the Chinese Bandits of 1961……”