SOONERS DEFEATHER KANSAS IN A 45-20 WIN 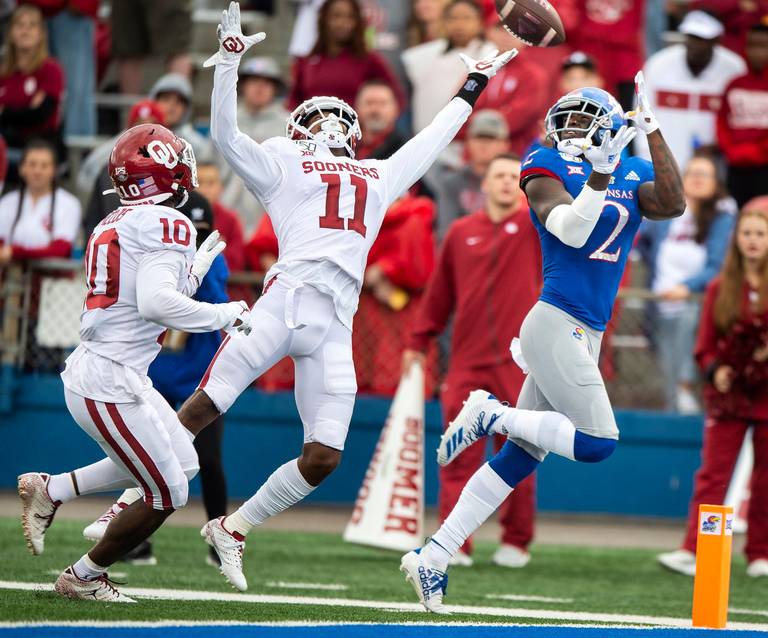 After watching Kansas take the ball In the first half and go on a 99 yard drive to take a 7-0 lead over the Oklahoma Sooners, I still did not think the game would be close at the finish.  It was not.  Hearing some Sooner fans complaining about a lackluster and poor performance by their team, I had to enter these thoughts in my blog.

OU did not only play good enough to win today, they went on a 42 point run before KU had a couple of touchdowns in the final quarter as the final of 45-20 should be good for the Big Red nation.

Jalen Hurts had, for him, a satisfactory game.  That against the Jayhawks is acceptable. Rushing tor two scores and passing for two others, Hurts did not hurt his Heisman chances as that issue will continue into the Texas game next Saturday.

OU’s offense was productive, not great, but the word satisfactory comes to mind here too.  Nothing wrong with being just ok when you are the best offense in college football, with respects to Alabama.  Rushing the ball for over 270 yards and passing for another round about 270 in a less than enthusiastic Kansas Memorial Stadium on a beautiful Autumn Saturday is good for Lincoln Riley’s Sooners.

Les Miles’ Kansas team played hard, with effort, and never gave up, even down five touchdowns in the final quarter.  I respect the Jayhawk effort and their feisty play that you could tell got OU’s attention.  A chippy game from the late starting warm-ups, that is always good for a hotly contested football tussle.  OU and Kansas has developed into this sort of rumble since the Mayfield disrespect two years ago in Lawrence.

The game play was entertaining (not to some Sooner fans) and I always enjoy a game like this..   Sure, the defense allowed Pooka Williams make some nice runs and the young quarterback for the Jays hit some passes. But for the most part, KU had to make plays and most teams worth their salt do so. This KU team is better overall than they have been in the past years since Mark Mangino.

From this game looking toward the Red River Shootout things to remember sports fans. First, OU with a full roster, void of any major injuries, unlike UT.   Texas and their defensive secondary is all beat up, with two starters out for the game.

Second, OU plays better against the Horns when the team are close (as in betting) and UT is not the big underdog.  OU will be favored but not by much.

Third, OU is better on defense than in the past couple of years and will go into this game with stoppers just as good or better than what UT will put on the Cotton Bowl floor.

And finally, Licoln Riley’s  offensive group is much better and have more bigtime playmakers than Texas.