“Les Miles lied to us. While married to Oklahoma State, Miles cavorted with LSU in a clandestine San Antonio locale. While coaching the Cowboys against Ohio State, Miles had LSU on the brain….And denied it all the while.” 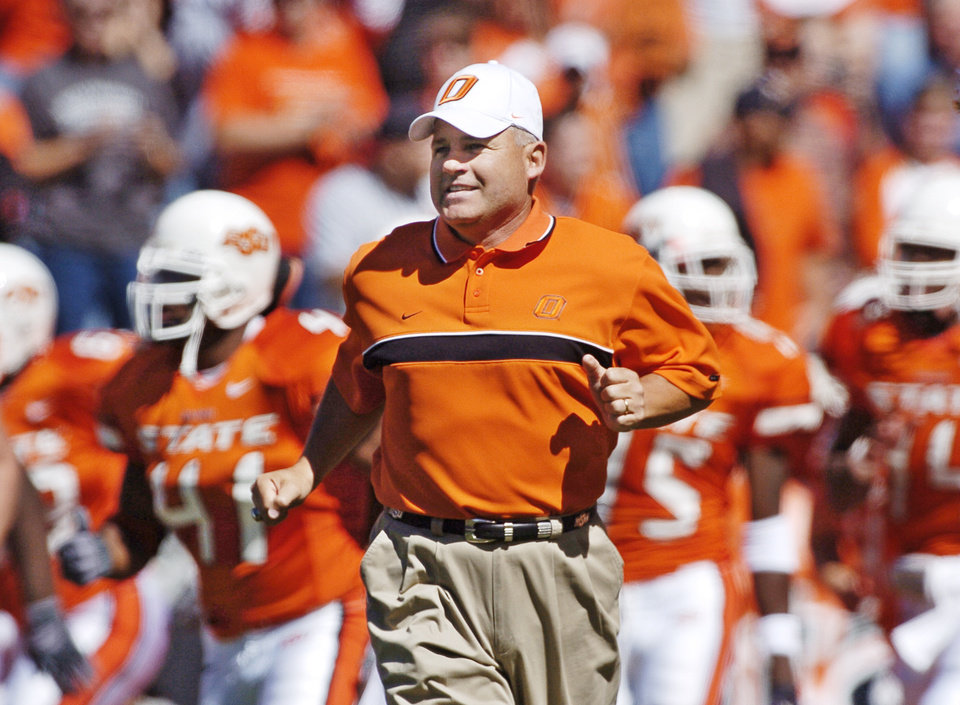 Les Miles, the head coach of the Kansas Jayhawks, is one hell of a great football coach.  In my opinion, his stops at Oklahoma State, LSU, and now Kansas will always be looked upon as successful, even if his current team in Lawrence is only five games into his stint at the Big Twelve school.  With a two and three record going into Saturday’s home contest against the fifth ranked Oklahoma Sooners, Miles has already proved that this current Jayhawk squad has improved upon his predecessor teams of the past few years, posting a Power Five road victory for KU. a 48-24 shellacking of Boston College, the first one against a P-5 team since 2008.  After many futile years getting the hell beat out of them in their various trips away from home against the better teams in the country, KU has found a solid base to build a “better” program than what has been for the Jayhawks.

With all the positives I can write about Les Miles, his departure from Stillwater and Oklahoma State in January of 2005 still sits with me as a character flaw that he had at the time and probably still has in 2019.  Please, for anyone that might be a Les Miles apologist,  I get it.  Below you will read that Miles was more a victim of the system of hiring and firing of coaches.  I am in the opinion that you are what you are, where you are and whatever situation you are in.  What I mean is that you make decisions that are right or wrong and that is on you, not outside influences.  We all can find excuses to not do what is right.  Miles is not a bad guy, and in fact, a man that many look upon as a straight shooter and one that can be trusted to do what he says. A man of his word.  Yes, I get it.  Yet actions on the contrary show that Mr. Miles had a lapse of mind on his move from OSU to LSU, and I cannot forget it.  And with that, if you are a Kansas supporter, be always aware that if another job opportunity comes along and Miles is given the choice to move to a better job, away from KU, he could and would take it.  I am sure that Miles has in his contract at KU to do just that without much of a personal financial penalty,  Miles is a very smart man and that should never be forgotten.

Miles move from Oklahoma State dirty with his players at OSU.  He was evasive and shady in LSU’s recruiting of him to Baton Rouge.  He acted one way but had alterative motives that he hid in his true intentions.

The history as of the Oklahoman newspaper:

SAN ANTONIO — Les Miles didn’t jet to New Orleans or Baton Rouge or anywhere else Thursday to meet with LSU officials about their job opening.  Miles, his wife, Kathy, and their four children boarded the team flight home and arrived back in Stillwater before 10 p.m. He reiterated that he’s heard little from LSU and still had no plans to interview for the position.

STILLWATER — Oklahoma State coach Les Miles will be offered the job as LSU’s next football coach, and he could be announced as Nick Saban’s replacement as early as Monday, sources said Saturday.

Specifics of any deal are not yet in place, but an offer is imminent.

According to a high-ranking OSU official, Miles has informed OSU president David Schmidly and athletic director Harry Birdwell that he will meet with LSU officials soon, but Miles did not indicate whether he has decided to take the job.

Miles was in Stillwater on Saturday night meeting with people close to him to discuss the situation…..Miles was scheduled to hit the road recruiting for Oklahoma State this morning.

BATON ROUGE, La. — Former Oklahoma State coach Les Miles said simply it was a job that he couldn’t pass up.

“The ability to recruit, to compete for championships and national championships,” Miles said. “My competitive spirit would not let me say no.”

Accordingly, Miles was introduced Monday as LSU’s 32nd football coach, replacing Nick Saban, who announced on Christmas Day he would be the next coach of the Miami Dolphins.

Miles met with some LSU players on Monday.

“I think he’s an intense guy,” said Andrew Whitworth, who will be a senior offensive lineman next season. “I think he’s a guy who’s going to be very focused on what he has to do and what he needs to do. That’s something we’re going to be excited about. This team has a goal to be successful, and we have a huge senior class coming back this next year.”

Wide receiver Skyler Green, who also will be a senior, said Miles “made a good decision to come here. I think he’s going to do a great job.”

Miles said he has yet to tell his former Oklahoma State players in person of his move. He said he’ll go to Stillwater and meet with them as a group when school is back in session later this month.

“I will speak to a group of guys who have done everything I’ve asked,” Miles said. “It’s going to be hard to say goodbye to a group of really good people.”

The new coach said he plans to interview current LSU assistant coaches and hadn’t ruled out keeping some of them, but made it clear he hopes most of his OSU staff joins him here.

Miles didn’t want to reveal the timeline for his contacts with LSU, but the search committee met with him for three hours in San Antonio on Dec. 26 — three days before OSU’s 33-7 defeat to Ohio State in the Alamo Bowl.

“I had interest and I asked that we not meet until after I played in my bowl game,” Miles said. “Skip said, ‘Well, I think we should meet now.’ And I said, ‘We should.’ ” Miles said with a laugh.

“I was in sweats and certainly did not feel that I made an exact impression.”

It couldn’t have been too bad, because Miles ultimately came to Baton Rouge on Sunday and met with LSU president and acting chancellor Dr. William Jenkins before officially being offered a contract.

Blame Miles’ dishonesty on the system

Les Miles lied to us. While married to Oklahoma State, Miles cavorted with LSU in a clandestine San Antonio locale. While coaching the Cowboys against Ohio State, Miles had LSU on the brain.

And denied it all the while.

That was last week. This week, OSU and LSU have new coaches, OSU has a 33-7 Alamo Bowl defeat on its hands and Miles must live with himself.

No excuses. Honor is not negotiable.

But the system didn’t help. The system took a man I believe is basically honest and made him dishonest. The system makes many a man do dishonorable things.

The system must be fixed.

Seven bowls this season were marred by coaches coming or going. The Fiesta Bowl was the grand farce; the head coaches of Florida and Stanford matched wits while the ballteams of Utah and Pitt played.

That’s competitive madness. That calls into question the readiness of teams. That makes you wonder if the games are fair and square.

Worse yet, the staffs of championship teams constantly are raided before the big bowl.

Georgia hired away Mark Richt from Florida State before the 2000 national title game; Richt tried to do both jobs, but his Florida State offense was snuffed by Oklahoma in the Orange Bowl.

Arizona hired away Mike Stoops from OU before the 2003 title game; Stoops didn’t make the same mistake and went on to his Arizona job full time, though he obviously was torn as he watched the Sugar Bowl from the sidelines.

The NFL doesn’t stand for such nonsense. The NFL says hands-off, no contact, with any coach, head or assistant, still involved in a season, with the exception of a designated period just before the playoffs. And no one can be hired away from a staff until that staff’s season ends.

Colleges can’t get so organized, can’t trust each other, can’t circumvent anti-trust laws.

But college football can help itself. As I’ve written before, change signing day. Make it the same as every other sport; November and April. Scrap the February date.

Change the date, and schools don’t get so antsy to change coaches. Then it’s not so crippling to go without a coach in December. The bowls can come and go, and then schools can do their dirty work, firing coaches or stealing the same.

The American Football Coaches Association is seeking a change but in the wrong direction. The coaches want the signing date moved up to December.

In even a less-than-perfect world, LSU could have waited for Ohio State to trounce the Cowboys, then talked with Miles.

Coaches could be hired in mid-January and still have three months to organize recruiting.

Instead, we’ve got anarchy. We’ve got coaches who lie and soil their legacy. We’ve got a sport that discredits what should be its best time of the season.