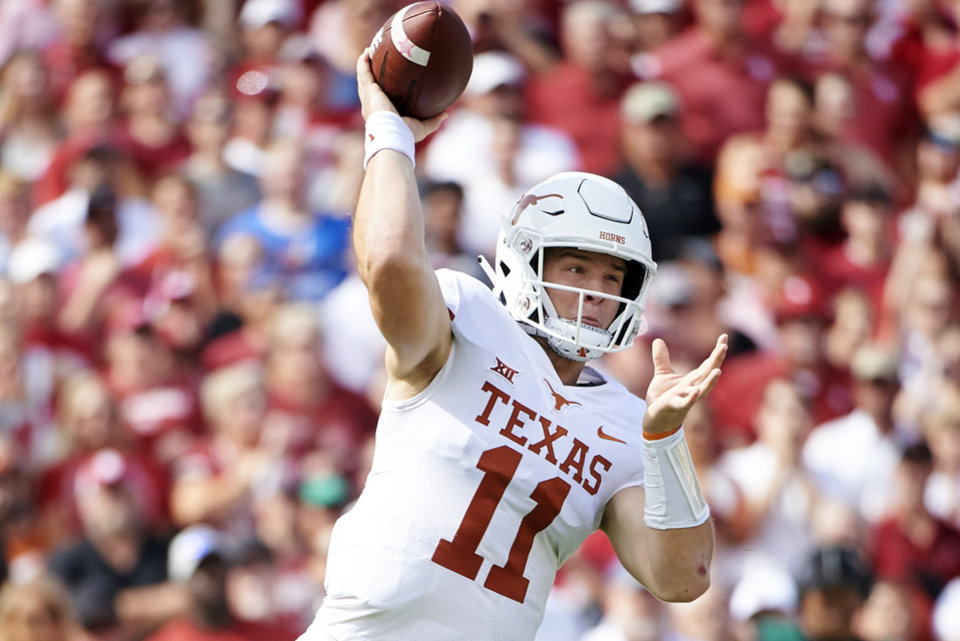 FILE – In this Oct. 6, 2018, file photo, Texas quarterback Sam Ehlinger (11) throws a pass against Oklahoma during the first half of an NCAA college football game at the Cotton Bowl in Dallas. The Longhorns face Oklahoma in the Big 12 championship game on Saturday. (AP Photo/Cooper Neill, File)

Big Twelve recap:  Oklahoma played as expected in their win at Kansas.  Jalen Hurts continues to prove that he is good enough to lead OU to the Final Four at the end of the season. KU has improved under Miles and they played a tough game with the Sooners.  The Jayhawks could win a conference game this year.  Their recruiting class for KU right now for 2020 is the 4th best in the Big Twelve and better players are on the way.

Texas Tech’s home win over Oklahoma State was somewhat of a surprise, but with the Pokes lack of good play against weaker opponents should have told us that Tech could win. And they did with OSU’s Spencer Sanders turning it over five times in Lubbock.   With young quarterbacks that can be expected on some Saturdays and Sanders threw three oskies and fumbled twice.  Better days ahead for him.

Texas was good enough to beat West Virginia. No surprise as the Mountaineers continue to have quarterback issues with the Sooner transfer Austin Kendall’s crapping down his leg.  His poor play is not giving West Virginia a chance to win.

Baylor won again with a dominate win over Kansas State in the Little Apple.  The Bears continue to improve and give hope for the Bear nation to upset OU or UT in Waco latter in the year.

Iowa State finally was dominate as they trounced the Horned Frogs of TCU.  The men from Fort Worth are not good when the defense cannot stop the opponent.

Oklahoma should beat Texas but it will be close. Things to remember sports fans for this game. First, OU is missing two offensive linemen but do not worry Sooner fans.  The replacements at the ONE position will be good.  Texas and their defensive secondary is all beat up, with two starters out for the game.  Issues with the defense and missing key players is advantage Sooners.

Second, OU plays better against the Horns when the team are close (as in betting) and UT is not the big underdog. OU will be favored but not by much.

Third, OU is better on defense than in the past couple of years and will go into this game with stoppers just as good or better than what UT will put on the Cotton Bowl floor.

And finally, Licoln Riley’s offensive group is much better and have more bigtime playmakers than Texas.

Texas Tech comes to Waco and the Bears win streak continues.  It will be a close game with Baylor winning 26 to 20.