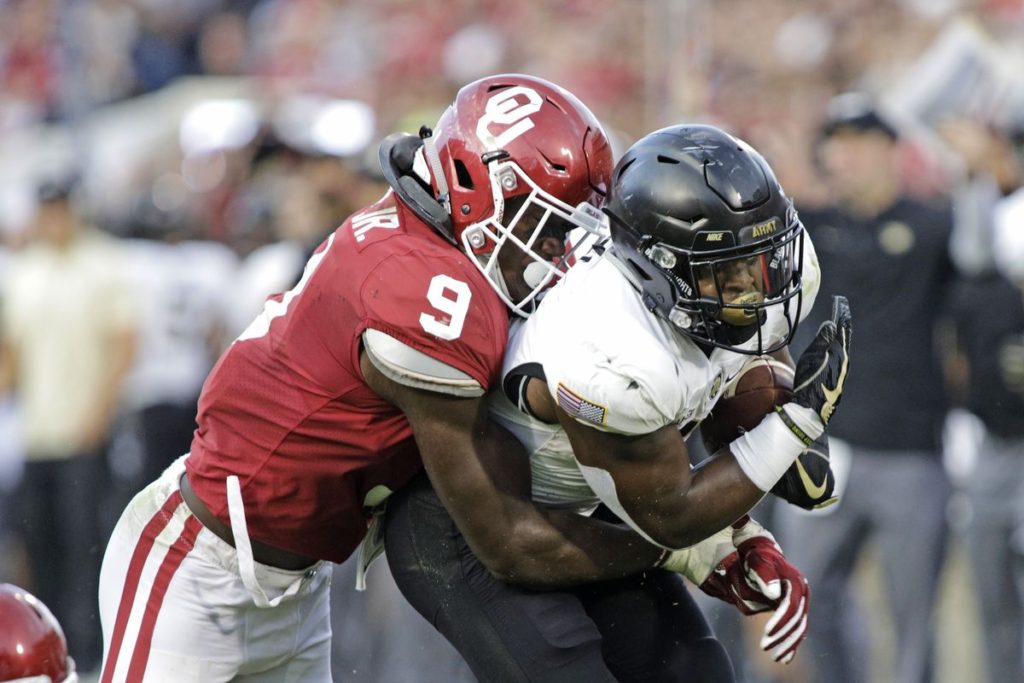 Saturday’s Big Twelve football contest between Oklahoma and Kansas State could be a closer tussle than the prognosticators  might think.

The afternoon game in Norman, OK, will be a good indicator to see if the Sooners defense has made significant improvement in stopping the running game of their opponents.

The Texas loss and TCU win put aside, OU will face a team in Kansas State that will assault them with an in-your-face can you stop us running game.

The ability of OU to get off the field on defense and not allow a team to chew up the game clock with time consuming cross country drives is still a concern.  This could spell a close game, win or lose, for OU, and nothing is a given with this defense that new coordinator Ruffin McNeil will direct.

Army almost pulled a major upset earlier in the season with their dominating running game and Wildcat coach Bill Snyder is smart enough to run the ball, in the beginning of this one,  in their attempt of keeping the score close.   Fact is that KSU is a better team than West Point in areas that give them a fighting chance to win this game.

The offensive line in Manhattan is not as skilled as what we see in the Army line that dominated OU’s front seven, but athletically, they are bigger, stronger, and can get a different kind of push, abet a direct straight push forward.  Army’s smaller offensive line blocked down with their chop blocking while KSU’s veteran group will push the line of scrimmage and work at dominating the Sooners up front.

The more powerful runners that KSU has, compared to the finesse triple option backs of Army, are excellent in breaking tackles. If OU does not stop the onslaught at the line, expect three, four, and five yards a snap, consistently. If Snyder finds success, he will wear that success out until OU stops them.   Do not sell KSU short on their offensive running game. They will get their yards.

When the visitors pass OU’s secondary will have more of an advantage in getting off the field as of the lack of the Wildcat passing game and not the Sooner back end.  Development of the defensive backs should be noted, and the Sooners should make some plays. But McNeil’s secondary is not a finished product.

If KSU cannot ground out first downs, keep the ball from the Sooner offense, this game could get away from them.

Can the Wildcats have success on defense against OU?  Probably not enough without some help in the turnover department.  Look for the Sooners to continue to move the ball with fidelity.

This game also hinges on the OU defense to make stops, but KSU has a much bigger problem in shutting down OU’s multi-functional offense, the best in the country.

OU gets it done on Owen Field on this Saturday afternoon.  Sooners win but KSU makes it closer than the Sooner Nation wants.  Sooners 41, Cats 27 as Kyler Murray keeps pace in his quest for a Heisman and is the star of the game.