And More-Fred's Movie Take One, Featured, From the Past, Home, Latest 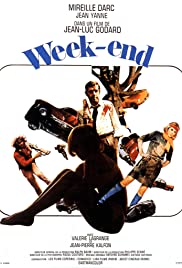 As I watch Jean-Luc Godard’s Weekend for the umpteenth time, my mind wonders to Washington DC, January 6th, as the insurrectionist with the horned headdress stands in the US Capitol and raises his hands in a rebellion signifying, as they say, nothing.

The following days after the deadly incident are corresponding with me the absurdity of the Democrats and Republicans’ as they fondle the issues of the American disintegration of the society of this nation. Add the Game Stop/Wall Street discombobulation that has followed, Godard’s France of 1968 to follow one year after this demonstration flick has nothing on the shit sandwich that the US is currently experiencing.

As Godard is happy to show the world a free voyeuristic meltdown of the French, it is now an America that is in our sights for us to witness the same as the troops continue to barricade the US Capitol, with the machine guns to follow, as our National Guard will have the necessary orders to mow down their fellow American citizens to keep those elected legislators safe in their office spaces.

As Godard made his own rules as the commentary and visuals proceeded in “Weekend,” our national leaders continue to wreck the country with the shredding of the Constitution, the Bill of Rights, and the freedoms that at one time had been guaranteed to every American citizen. Goddard’s “Weekend” is America’s weekend but in the time frame of a year. No, more like four years of a Biden White House. It is not ‘Alice in Wonderland….it’s Biden, and Harris, and AOC….in Wonderland. Five stars out of five stars on my Letterboxed review.

And More-Fred's Movie Take One, Featured, From the Past, Home, Latest