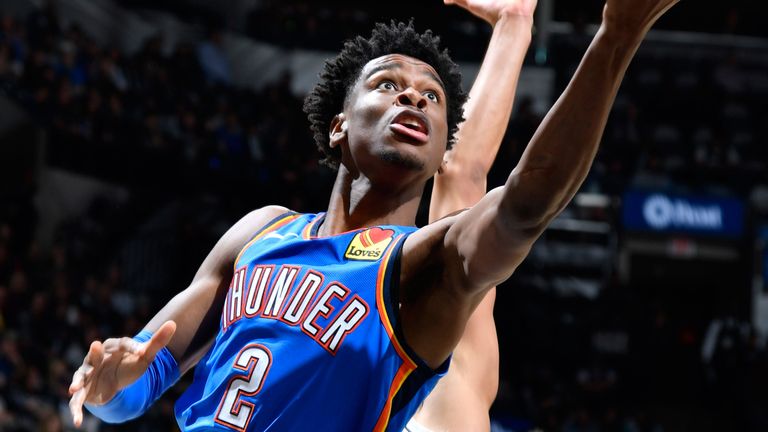 With a record of ten wins and thirteen loses at a little more than on quarter of the current NBA season, the Oklahoma City Thunder has set their course in getting to a lottery pick in the next draft.  Sure, the Thunder have actually been better than some thought they would be at this time, but as the team scrambles through the season, Big Blue fans should not worry that the team will win too many games not to get their chance of a very high draft pick.

This team, as directed by General Manager Sam Presti and coached by first year mentor Mark Daigneault, have done two things really well.  The development of the talent already here on Reno Street and the Thunder team concept of hard work continue to prosper as the NBA works its way through another season.

A look at the current roster and the prospects for their future with OKC:

TREVOR ARIZA: Age 36  Has not played and is not in the future plans. Will be a retired NBA player shortly. Long range future with OKC:  None.  Trade possibilities: Extremely high

DARIUS BAZLEY:  Age 21.  Current starter.  Continues to develop his skills which are numerous.  Strong on the ball offensive skills for a young player, adequate range, and a competent defender, could be a part of the long range future if he continues to improve and become more consistent.  Not afraid of the game and takes risks.  Could be a starter in the NBA for many years or a top reserve at least.  Should not be a salary issue that OKC will have to deal with when the time comes.  Long range future: Will be with OKC in five years.  Trade possibilities: Medium

MOSES BROWN:  Age 22.  Very limited action.  Long range future: Will be out of the league in 5 years.  Could hang with OKC for another year but nothing is guaranteed.  Trade possibilities:  High  but could be released by team.

LUGENTZ DORT Age 22. Current Starter. Has become the primary defender on the team. Having a contract that locks him with the Thunder, he will wait until he can sign a better deal in three years. Valuable player that will demand a lucrative contract in the future.  A long range piece in the future of the team. Has developed his offensive game and three point shot. Long range future: Long time starter and important in the rebuild.  Trade possibilities: Weak but could be an important piece in a trade.

SHAI-GILGEOUS-ALEXANDER  Age 23.  Current star of the team.  Hopefully the Thunder can keep him for the balance of his most productive years in the Association.  Long range future:  Here in OKC.  Trade possibilities: Anyone is tradeable but not not SGA right now.

JOSH HALL  Age 20  Role player/backup.  Long range future: Insignificant team member.  Trade possibilities:  If anyone wants his services.  A pawn in any future trade at most.

GEORGE HILL Age 35  A veteran guard that has some abilities other teams might want for a run in 2021.  Not in the long range plans and a trade most likely in the coming weeks.  Injury to hand does not bode well, either for OKC or for Hill.

AL HORFORD  Age: 35  A capable center that would be a good addition to a team that needs a boost for the final months of the season.  Not in the long range plans and a trade likely in the coming weeks.

JUSTIN JACKSON  Age 26  A good backup on this Thunder team and has shown some ability to play various positions.  Could be in OKC for a few years as a low budget team member.  Trade possibilities: Average and could be a secondary piece in a much larger shuffle of players.

TY JERONE Age:  23  Team member that fills out the current roster.  Not in the long range plans and could be a trade piece at any time.

THEO MALEDON  Age: 19  An important guard in the rebuild.  Has shown abilities and improvement in his short time with OKC.  A future backup guard and possible starter as a pint guard when needed.  Currently in the long range plans but could be an important trade piece.

DARIUS MILLER  Age:  30  Coming back to the NBA after a couple of years in Europe, is not in the plans for the future but could help anther team as he gets back to action.  Has played well in this short time on the court and has been solid as a backup.  Trade possibilities: High

MIKE MUSCALA  Age:  29   Has played well this season and shows he belongs in the league as a deadly three point gunner.  Likes playing in OKC. Long range not in OKC’s plan.  Trade possibilities:  Strong

ALEKSEJ POKUSEVSKI  Age 19  Youngest player in the NBA, Presti is hoping that the seven footer with point guard skills can deliver a starting player in time.  Has tremendous potential and his development will continue.  Long range piece for OKC. Trade possibilities:  very low

ISAIH ROBY  Age 23  Has developed into a good center backup for this team.  Continues to improve.  Long range he could be a piece in this rebuild as a back up post player.  Trade possibilities are average.

KENDRICH WILLIAMS  Age 26  Has played will for OKC and a key backup. A player that could be in OKC for a few years as of his ability and salary considerations.  Trade possibilities:  average.