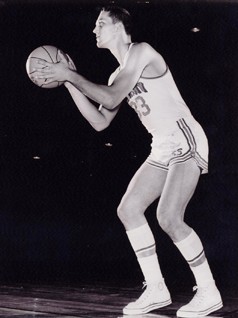 A life long resident of the Oklahoma City metro, I spent my middle childhood years from age ten through my high school time living in the Las Vegas neighborhood in near Northwest OKC.  It adjoins the historic Gatewood Neighborhood to the east.   My family inhabited a home that my Father bought two blocks from the Sheppard Mall, the first major indoor mall in the state.  The home was remodeled by my Dad as he added a new playroom and garage with an attached nine foot six inch basketball goal affixed on the car port he also built.  The house had been the former home of one of the busiest “bootleggers” in OKC back in the day and the family marveled at all the moveable floorboards where this supplier of booze would hide the bottles just under where you would stand and walk.  The house on 21st street, 2000 block, was just a short walk to where I would attend schools for my elementary, junior/senior high school, and university education.  Fact is, I spent my learning years attending school from 1959 through 1974 in campuses that were within four blocks from each other.  Gatewood Elementary, Classen High School and Oklahoma City University were my stomping grounds.

It was a great place to live in the middle 1960’s maturing into a fairly normal sports minded kid that lived all sports even if I did not have the athletic body to play football.  Fact of the matter, as I developed, I was very protective of my body and the fact that I did not like the extreme physical contact of the game I did not follow my Dad’s rough and tumble upbringing of twenty-five years in the past.

My Pop was a very good athlete in high school (also Classen, on the Boulevard) in the late 1930’s, good enough to receive a scholarship to play football and basketball at a division one southern university.  His college career lasted only two years as of the war and I could not match his physicality, speed of foot, and athlete ability.  That athletic prowess did trickle down to my children as both were active in high school athletics twenty years after my high school years.

I practiced basketball at my home goal everyday that it was not too cold or raining, and the goal that my Dad had erected was of the highest quality and the backboard plywood the same.  It was my outlet as I would play imaginary games, day in and day out.  I would score for both imaginary teams, making long shots, put backs, and twisting layups.  As a ten year old, I had my goal and space to play basketball and I was as happy as any kid could be.  Add my best friend of the time (Skip) and the never-ending games continued for hours upon hours.  I had a blast growing up.

From my early years of three to eternity, now 64 years and counting, I attend basketball games. As a three year old it was my Uncle John Pratt’s Midwest City Bombers as of his teams from 1951 through 1973.  I never missed a Bomber game from age three until I went to junior high at Classen in 1965.  I also attended all Oklahoma City University Chief home games (Division One) after we moved to the Mall area, and could even walk to the games at Frederickson Field House on the most snowy game day.

Early April, 1965, the next door duplex was rented to a rather tall young man, a guy that I identified immediately.  I had watched him  for a couple of years playing hoops for my OCU Chiefs, and he was not a “chicken salad” sort of player.  He happened to be an All-American hoopster from Rocky, OK, a hotbed of top high school players that attended the school on NW 23rd.  Gary Hill was his name and he was also member of the San Francisco Warriors of the NBA during the previous basketball season.  Hill was going rent the duplex for a few months as he was going to assisted OCU head coach Abe Lemons during the off season and finish his degree.

After some pleasantries between a eleven year old kid and a 24 year old NBA player, Mr. Hill (to me at the time) was impressed with my home basketball setup and asked to shoot some hoops.  He could tell that the goal was six inches short of regulation, but no matter to him. It was a goal with plenty of space around it to work up a sweat, so he took my better than crap regulation Wilson rubber basketball and proceeded to play like I had so many times. He was actually playing against imaginary defenders, making all kind of basketball moves as he work up that sweat on that rather warm spring day.  About fifteen minutes in to his little fun on my “court”, Mr. Hill had just enough fun and decided to show me what he could really do.  Taking the ball from the farthest distance, still on concrete, he proceeded to take a couple of giant steps (he was a 6’4 shooting guard) and go hard on the drive, slamming that poor basketball so hard that he pulled the complete steel goal out of the wooded backboard, ripping the thing to the ground as he avoided tripping over the broken device.  The tall guy looked at me, said he was sorry, and crossed the grass and entered his duplex.  I stood there, looking at my goal on the ground, wondering what the hell had happened.   I did not cry but I sure could have….I just stood there and bled to be truthful.

From that day until Mr. Hill moved out late that summer to attend pre-season camp for his new NBA team  (the Bulltets), he never made contact with me, never visited with my Dad, or tried to compensate me for the damage he did.  My Pop had my goal fixed by the next day so all was fine in  a short time.

Many years later, say around 40, I met Gary Hill at an OCU ceremony held during half time of a game in OKC.  I told him of the experience and he did not remember it but he said he sorry again, again.  He was a rather older looking man for his age (67) and you could tell he was not in good health.  He had that look of a short timer with the wear and tear of a harder than normal life.  I suspected that he was a heavy smoker as he had that look.  Gary Hill passed to the big basketball court in the sky a short time later and I am thankful that I got to meet him as one adult to another.  From all that knew him, Gary Hill was a kind and gentleman in all respects.   I will always hold a special memory for him as a great Chief.  God Bless the man.

Hill played for OCU from 1959-63.
Hill scored 21.1 points a game as a senior in 1962-63. OCU’s team was billed as the tallest in college basketball to that point with an average height of 6-foot-7 and one fifth. Hill, 6-4, was known as an outstanding ball handler, great defensive player and a high-percentage shooter. He was named all-American by the Helms Foundation.
In 1962-63, OCU went 19-10 and advanced to the NCAA Tournament for the first time in six years, finishing fourth in the NCAA Midwest Regional in Lawrence, Kan. The Chiefs had a 13-game win streak. Hill scored nine of his team’s final 11 points against in a 70-67 win over Colorado State in the NCAA Tournament at Lubbock, Texas.
As a junior, Hill scored 17.4 points a game, becoming one of four on that team who averaged double figures in points. Senior Larry Jones was OCU’s leading scorer at 19.7 points a game, sophomore Bud Koper added 15.9 points a game and senior Eugene Tsoodle averaged 14 points a game in 1961-62. That was the first time in program history an OCU team featured four double-digit scorers for the season. The 1961-62 Chiefs averaged 82.1 points a game, the most in a season by any college basketball team in Oklahoma to that point.
Hill played in the East-West game in Lexington, Ky., and scored a game-high 18 points. He was also an alternate on the Pan-American team.
The San Francisco Warriors selected Hill in the second round of the 1963 draft. Hill was on the 1963-64 Warriors who finished first in the Western Division and featured Wilt Chamberlain. Hill spent two years playing in the NBA for the Warriors and the Baltimore Bullets.
Hill spent 22 years as director of the Firstep men’s alcohol and drug treatment program in Oklahoma City. He coached basketball at Custer City, Okla.
Hill came from Rocky, Okla., where Bud, Henry and Ron Koper, Jay and Dennis Harris and Steve Fite came from before starring at OCU. They became known as the Rocky Rockets. Hill scored 2,739 points and averaged 24.5 points, setting state records and becoming an all-American during his high-school career.