SHAI GILGEOUS-ALEXANDER IS THE NEW FACE OF THE OKC THUNDER 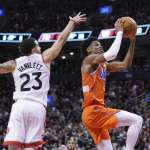 The team on Reno Street has found it’s new “superstar” and that guy is now getting significant talk of being at the 2020 NBA All-Star game. The improvement of Shai Gilgeous-Alexander, a second year player in the Association, has taken notice of those in the know. In fact, league followers have eyes that are bulging out, like in the tradition of House Representative Adam Schiff. “SGA” is not just full of potential. He is killing it on the court. Just as you cannot disregard that protrusion of Schiff’s eye balls, you cannot just look away as SGA continues to tear up the Thunder’s opponents on a nightly basis.  SGA is now the new fact of the Oklahoma City Thunder.

He has all the shots, long, midrange, and driving to the hoop which make SGA a dangerous scorer in this league. As of his coaches and team-mate and current mentor, future Hall-of-Famer Chris Paul, SGA is also getting it done on defense, making him an all around player, something that OKC has lacked in the past.  That is significant as the Thunder can use SGA in various ways on both sides of the ball.  Even with his slim body frame, this coming of age second year man will fill out as he matures, giving him more strength to add with his agility to make plays and shots on his own.  Time will only be good for him as he has noted.  SGA noted to the press this week that improvement every season is his goal.  SGA can look forward to point averages in the high twenties or more as the years pass.  As a point guard or even as an off-guard, SGA will develop into one of the true superstars in the league.  His potential is out of this world even as he continues to be, often times, the best player on the court in 2019-2020.

From CBS news: In four games, he took over the Thunder’s scoring load in resounding fashion. Shooting the ball just over 20 times a game, the second-year guard managed 28 points per game — including two 32-point performances. Coming out of college, there were questions surrounding how well Gilgeous-Alexander could shoot the ball. Well, after displaying an improved stroke much of this season, SGA connected on 47 percent of his shots from downtown over his four-game stretch this week.