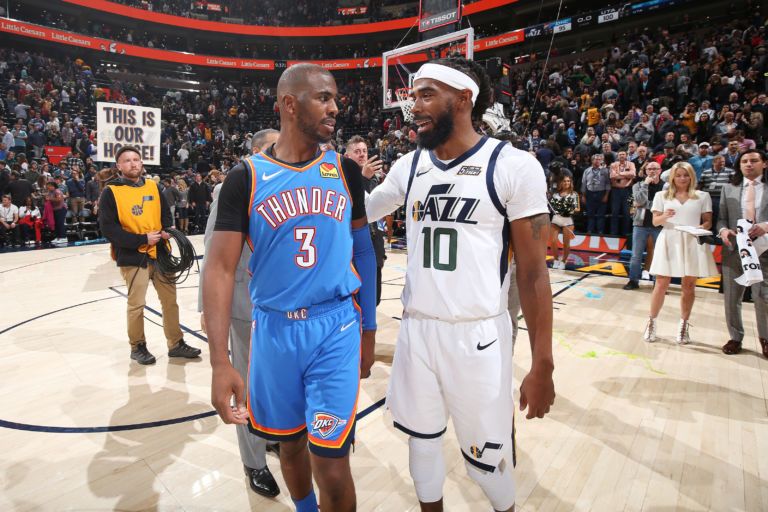 MINNEAPOLIS, MN - OCTOBER 23: Chris Paul #3 of the Oklahoma City Thunder and Mike Conley #10 of the Utah Jazz talk after a game on October 23, 2019 at Target Center in Minneapolis, Minnesota. NOTE TO USER: User expressly acknowledges and agrees that, by downloading and or using this Photograph, user is consenting to the terms and conditions of the Getty Images License Agreement. Mandatory Copyright Notice: Copyright 2019 NBAE (Photo by David Sherman/NBAE via Getty Images)

Yes, Oklahoma City lost last night in the season opener in Utah against the Jazz.  The score at the end was close, and for the experience I was afforded by the Thunder basketball presentation on Fox Sports Oklahoma, I was not only entertained but mostly left feeling good after the game.  The first regular season contest without the great Russell Westbrook on the Thunder roster in it’s eleven year history in OKC, was telling.   I did not miss the future Hall-of-Famer, as of the endless same old patterns of play he gave us during that time.  Sure, I should be somewhat sad that he is not in Thunder blue and now takes his game to Houston with his friend James Harden.  Through the years I was enthralled watching his play, his on court mannerism, and his stat producing never give in attitude.  But the fact that for eleven years I had to suffer the bad with Russell’s play to go along with his exquisite engrossing antics for the good, I was worn out as a fan.

The fact that I felt relieved that the road with the one from UCLA was over and no more of his act did I have to endure.  I am a Westbrook fan, but before him, I was a Chris Paul man, having followed him in his two successful years on Reno Street as a Hornet, before the Thunder was moved in from Seattle.  I could remember how Paul is every bit as great a player as Russell, and to see a Thunder team that was not totally controlled by one player (Westbrook) was fresh and needed for my viewing taste. Paul was efficient as he could be last night, hitting his threes, his free throws, and not turning the ball over to the Jazz.  I welcomed that play, and with that, I was satisfied in having Paul with OKC for however short the stint might be.

Some things jumped out at me in game one.  OKC was prepared by the coaches to play a so called superior Utah team, but after a slow first quarter, the Thunder proved that with some better in-game coaching, they  are not far off from being not only a good team, but a playoff one.

The ball game was one that the Thunder could and should have won.  As much so as Utah.   First, it is about time to tell the Thunder players that cannot hit free throws that there will be no excuses.  These bad shooter from the line sank OKC last night, with Steve Adams himself, going one for six.  A winning team cannot have that.  OKC missed ten throws, enough to give the team a win.  Plus the fact that Billy Donavan had Dennis Schroder guarding the hot Donovan Mitchell in crunch time, allowing him to make, easy elbow jumpers over him and also Adams, that too is just not good basketball.  I blame the coach, not Dennis, as the defense failed.  That just cannot happen.

Another time, with the ever improving second year “star” for OKC, Shai Gilgeous-Alexander, scoring at will in a stretch of the game, Donovan pulls him from the game in that scoring run.  Why? You do not take a hot shooter out.  You let him have his heat check first.  Bad coaching decision.   To sum it up, Donovan and staff need to do much better while the game clock is running.  That game last night should have been a Thunder win.

To sum it up, I missed the old Thunder of Westbrook and Paul George and their crew.  But I am totally excited with Chris Paul and the new guys. They are very talented.  With some extended time in OKC, these guy, with some better coaching, can win a lot games. They do not need to take a back seat. It is all up to Sam Presti. Will he send Paul, Schroder, and Danilo Gallinari to other teams.  He might. But he needs to think about this team he has right now.   They can compete. Or Presti can wreck this team into a twenty win season, one that will challenge my endurance of attending every game that I have done in the past.  I do not need OKC to win, but I cannot stomach a GM that could ruin a good team for something that might not happen in my or his lifetime. That is the way I see it sports fans.