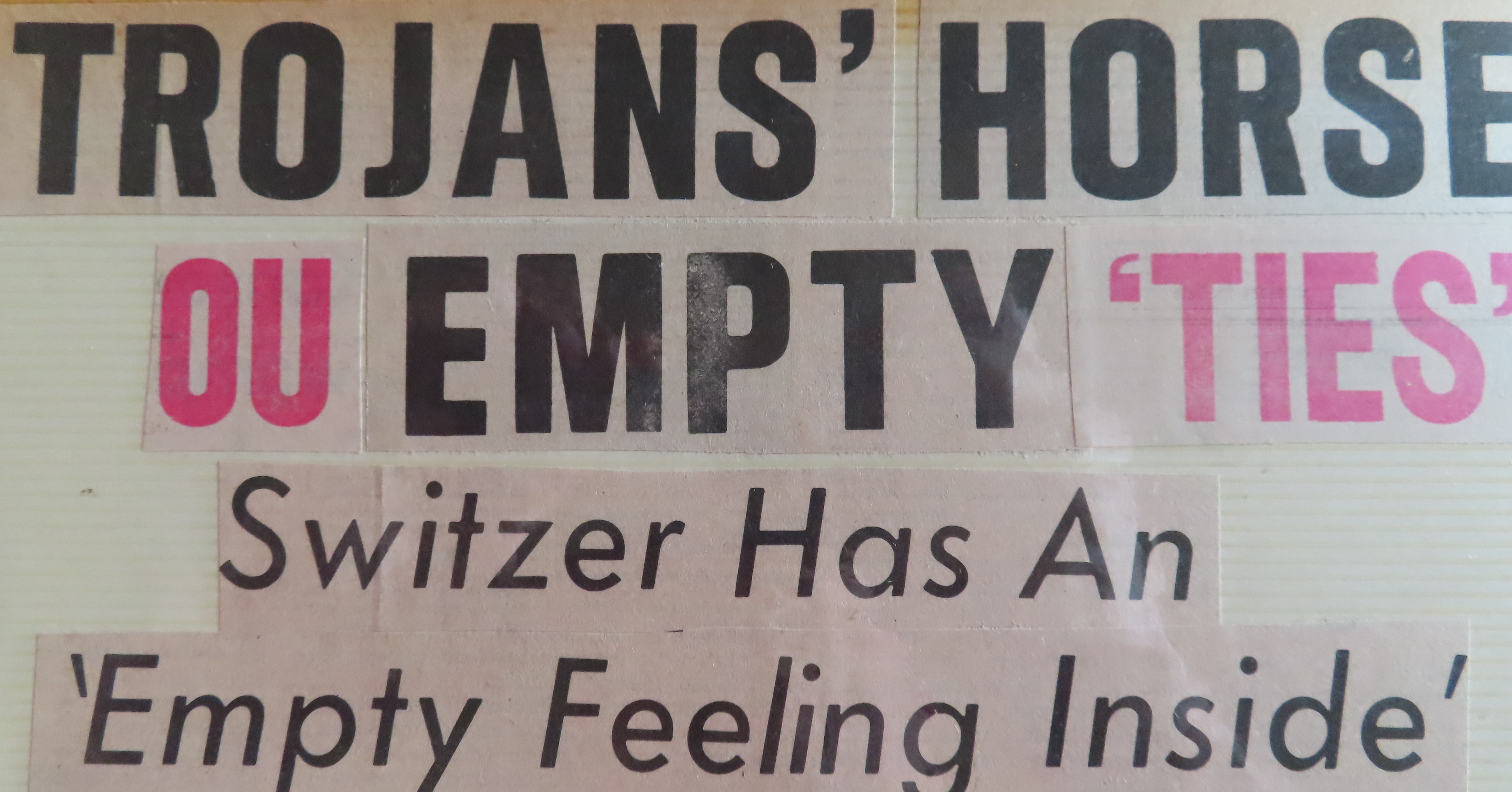 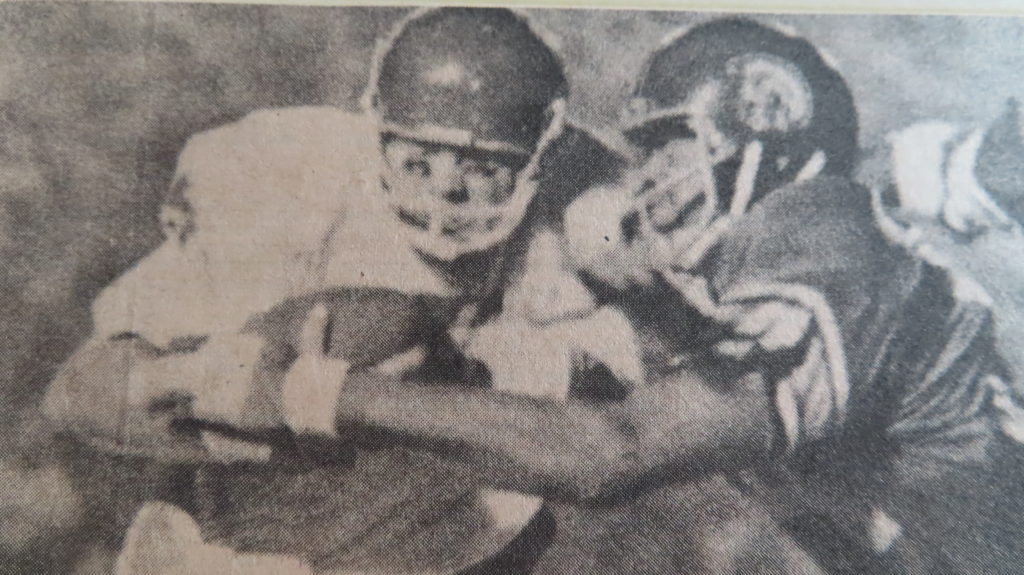 The second game of the season for the Oklahoma Sooners in 1973 would be historic for all involved, including the new head coach, Barry Switzer, and one of the greatest players in OU history, “Little” Joe Washington.  The game would set in motion the Sooners as the dominate college football program of the 1970’s. With the next game for OU a week later,  a 28 game winning streak for quarterback Steve Davis and the Sooners would begin. 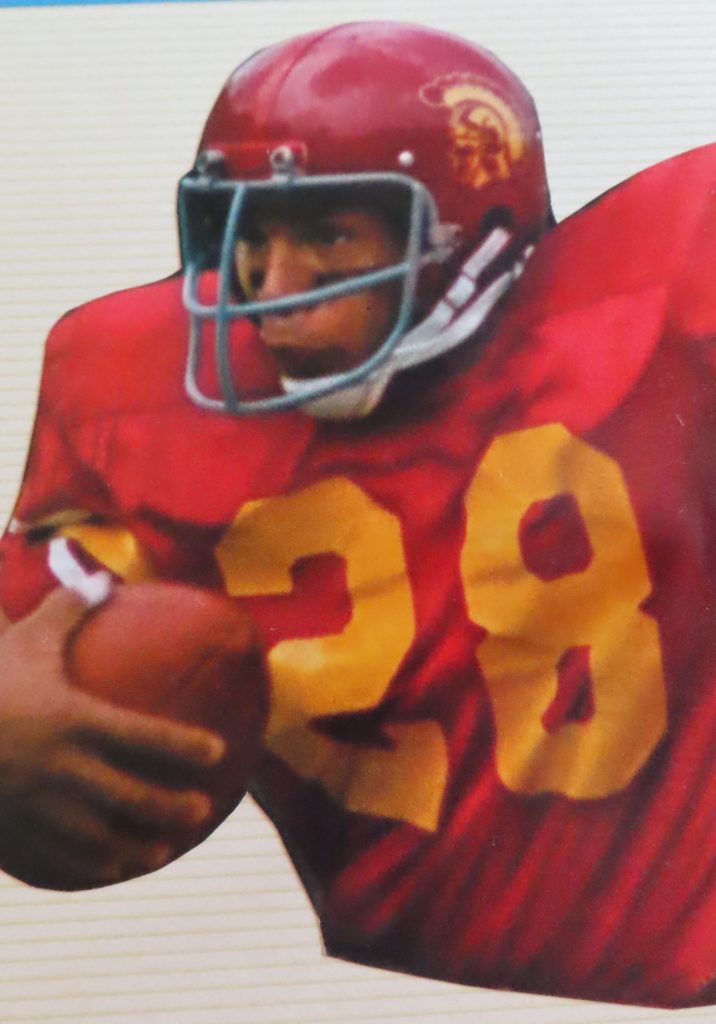 As Oklahoma had “run” over the Baylor Bears two weeks earlier in Waco, the Sooner wishbone had performed as some expected gaining close to 500 yards in a 42-14 blowout on that hot Saturday night in early September.  As sophomore quarterback Steve Davis executed the ‘bone in a very good way (as Bob Stoops would say), the “one game under the belt” signal caller had an extra week to prepare for the USC Trojans in a night game in the massive Coliseum in Los Angeles.  Not only against a great power in USC did this quarterback and young football team had to meet on the rather high cut natural grass, the Trojans were the defending National Champions with a roster loaded of future All-Americans.  Add the future Hall-0f-Fame coach John McKay walking the sidelines for the men of Troy, USC was loaded for a massive effort against a Sooner team that was working on finding a way to stay in this game, let alone win it.

John McKay understood that OU was not chicken salad.  He was aware that Barry Switzer and his staff were efficient and tough coaches   He understood that the Sooners would test his defending National Camps. But he also believed his team was better.  He respected OU, but he did under-estimate them, especially their talent level on that particular night.  Added that the Sooners, like the Trojans, recruited the best talent in the country.

Both teams were full of outstanding players dotting their depth charts. McKay was smart enough to know that when all things were equal except experience, his Trojans should take the evening. USC had the experience and nobody had to tell them they were on top of the college football pecking order.   But it would not be easy as McKay also knew that the Sooners, young but equally talented,  would not just lay down and allow his team to push them around. He understood that when two great programs play, the team that won usually would make less mistakes, take advantage of breaks, and in the finality of the game, want it (to win) more.  McKay learned a lot that evening playing OU and in fact, all things were not equal.  The better team did not win nor lose on that field. And that OU was , in fact, the better of the two teams.

The whole of the LA sports scene did not understand the psyche of OU for this game.  The west coast media said that because the Sooners would not be able play a season ending bowl as of probation, this tussle with USC would be their “bowl game”.

For the Sooners, as expresses by sophomore wide receiver Tinker Owens, he pooed that thought.

“Heck, this isn’t a bowl game to us.  We’re always playing big games, and this is just another big game,” the elusive pass catcher said,  putting the LA newspaper man straight.

With 80,000 fans in attendance, almost 8,500 from Oklahoma via charter flights from Will Rogers Airport in Oklahoma City, the game was a mismatch in everything but the final score.  Oklahoma kicked the Trojans up one side of the field and down the other.  The younger and less experienced Sooners did everything but win the game.  With a 7-7 tie, Oklahoma had proved that the 1973 season would be one of more than “hold your own” and wait until 1974. 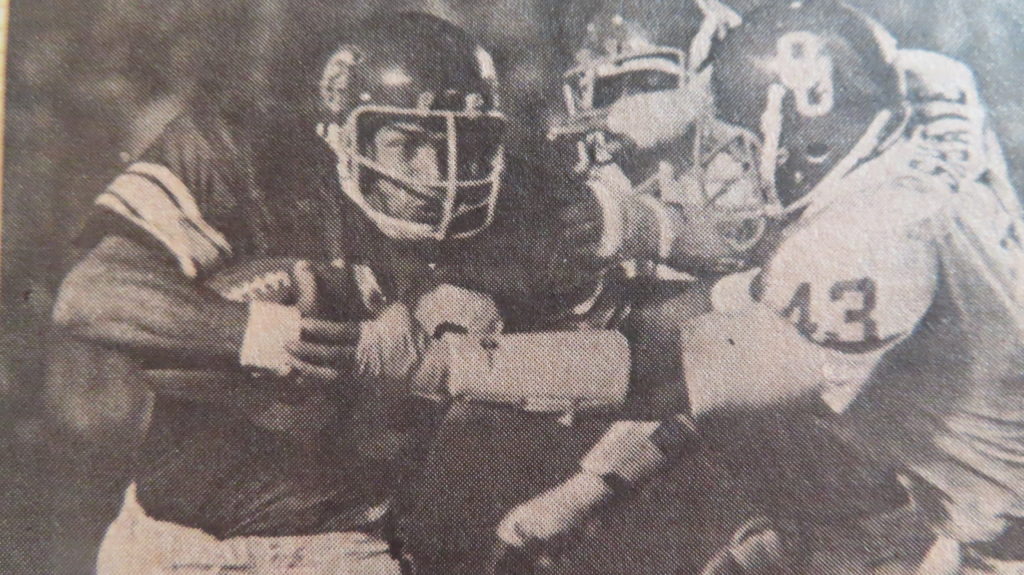 I could retell the game, blow by blow, but that is distent memory and really not of much significance.  What is important to remember is that the defending national champions had met a team better than them.  It is also important to remember that the best players on the grass that night wore the white with red trim and not the USC cardinal and gold.

John McKay also found out that for him to chalk up another natty, at least for the next couple of seasons, the  title path ran through Norman, and Los Angeles, as both would be crowned the best in the following year, 1974.  The Sooners had arrived and would not taste defeat until the following season of 1975 and OU had ascended to the top of the sport with the tie.  The dominate Sooners did not have to give USC their due after this game, as OU proved the better team.

OU’s national ranking jumped up that next Sunday and stayed close to the top or at the top for many Saturdays upcoming. The rankings on Sunday pointed this out. 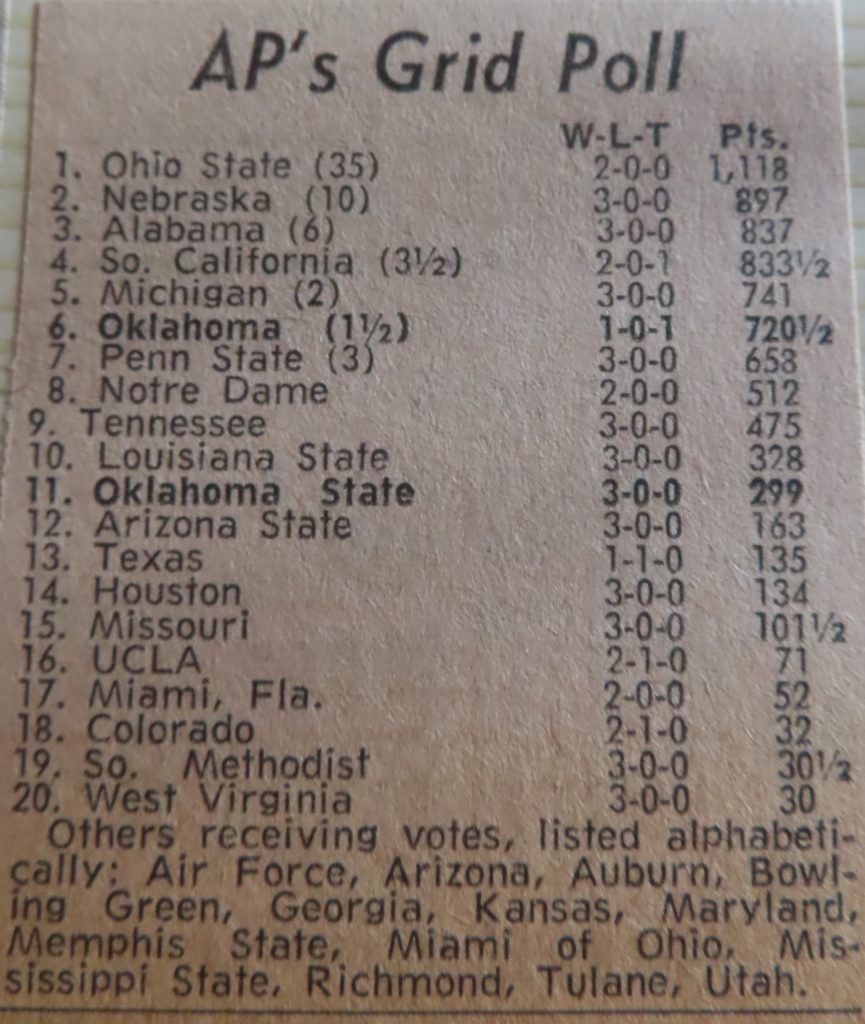 Joe Washington was the star of the night and we all know why. His punt return (below) is one of the most exciting plays in college football history and the silver shod star was the best player on the field that night.

From this game to the Kansas lost in 1975, OU never tasted the agony of defeat.  Sooner quarterback Steve Davis was totally upset with the tie, and by the end of his senior season this tie and the Kansas loss in Norman kept him from being perfect.  Davie blamed himself for the loss, crying in the locker room telling reporters that it (the tie) “was so disappointing……you can never play as good as you can.”

This would be a different Davis than the one that did not cry after the loss with Kansas two years later.  With that loss, and hearing his home crowd in Norman boo him and the team after so many wins without losing, Davis let everyone know that his disdain for Sooner fans had developed suddenly, after that loss.

Davis learned a lot about Sooner fans in his years in Norman. You can never be a happy Sooner fan if you lose, even just one game in a career.  Davis never got his due as the greatest winning quarterback in school history. And that is a damn shame if you want my opinion.  With that KU loss, as I sat in my seat in Sec. 9, and heard the boo birds call out to the Sooner offense (Davis Included) on the field on that last possession, I too had an upset feeling in my gut.  I was not proud of being a Sooner that day.  I wanted to go puke,not of the Sooner team, but of being part of an ungrateful Sooner nation. 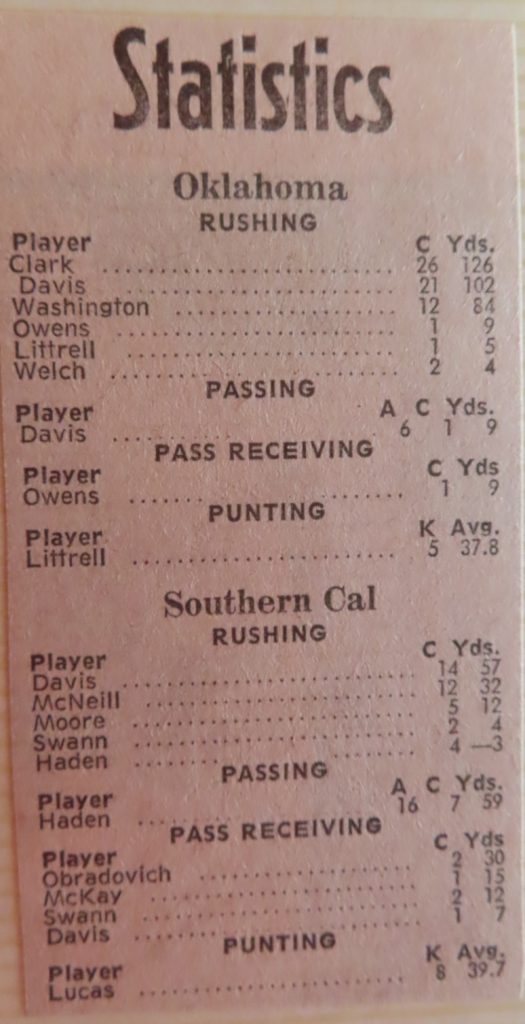 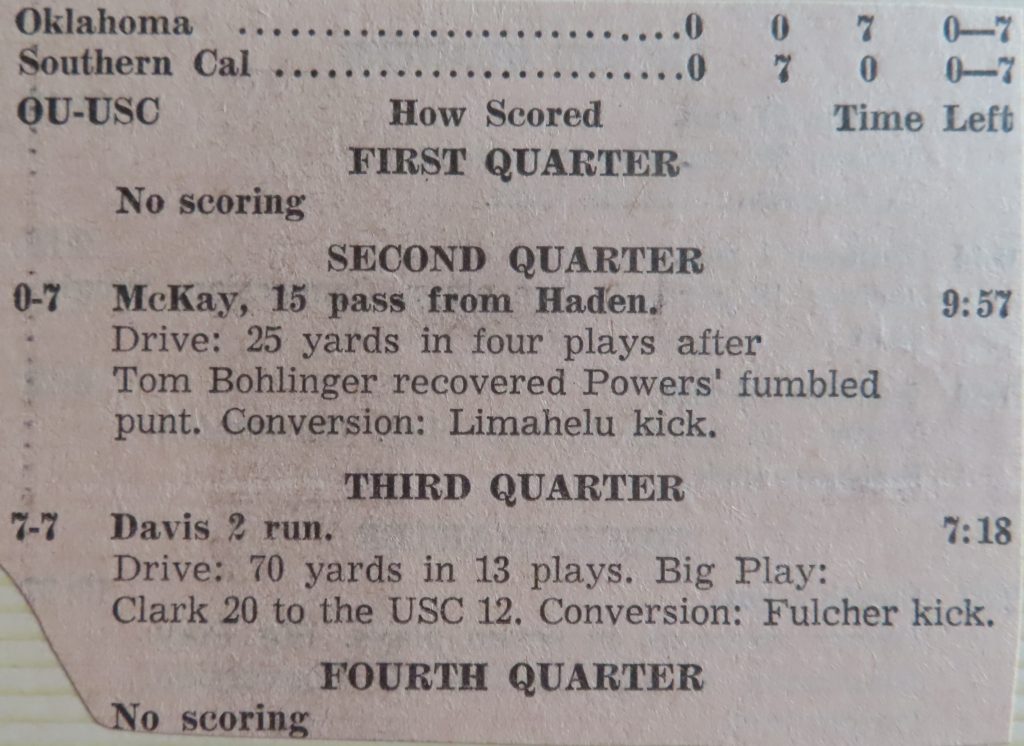