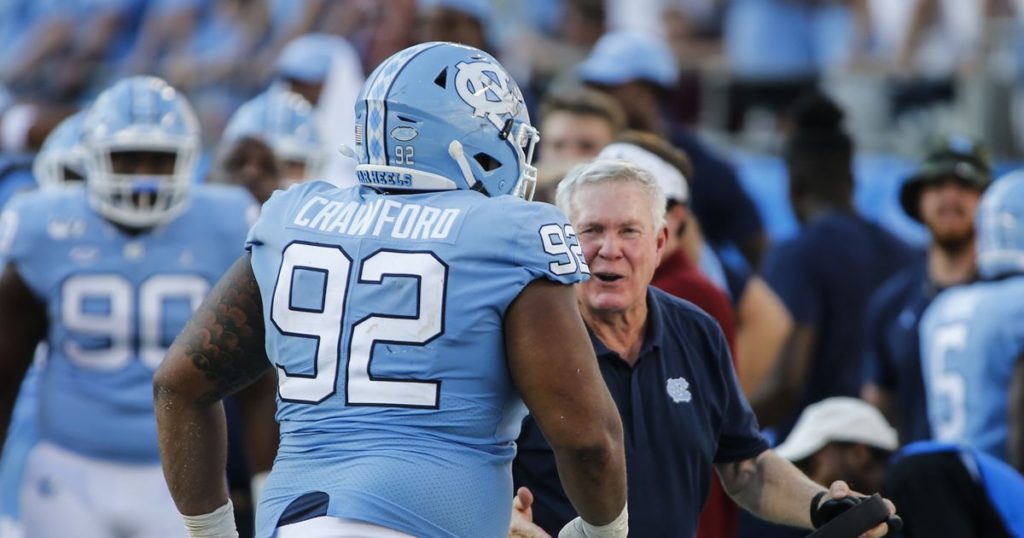 The following article was written after Mack Brown had be relieved of his duties as the head football coach at Texas and replaced by Charles Strong.  This past weekend, Brown led his North Carolina Tar Heels to an upset victory over the South Carolina Gamecocks of the SEC.  The coach, highly respected by the college football world, shows why he is one hell of a fine football coach.

(On December 14, 2013, Mack Brown announced his resignation as Texas’ Head Coach effective following that season’s bowl game. On November 27, 2018, Brown was named head coach at North Carolina after a 5-year absence from coaching and 21 years after he left UNC for Texas.)

The University of Texas replaced the resigned Mack Brown yesterday with Louisville head coach Charlie Strong, the first black man to head one of the four major programs in the Longhorn barn (football, basketball, baseball, women’s basketball). I have dished on Coach Mack for many years as he, at times, was the brunt of jokes. Mack Brown coached at Texas for 16 years, winning one BCS Championship in those seasons in Austin. One BCS title you might say is not enough for a program like Texas, but as we all know, if your name is not Saban or Meyer, multiple titles are hard to come by.

I will state flatly that Texas needed to make a change, not that Coach Mack wasn’t an effective man on the job, but that there comes a time in which a coaching change is good not only for the school but for the out going coach as well. Coach Brown had some tough times in his final few seasons, and a possible continuing of those tough times looked very possible.

Still, one must not, can not, over look the job that Coach Mack did in his run, and his coaching record, not as great as Daddy D , but better than D.X Bible’s tenure at the school. Brown will go down as a legendary coach at the school.

Least we forget, the Univ. of Texas’s football program has been touted at the best coaching job in America. Brown commanded a top salary, as will the new coach. Texas has more funds to support their programs than anyone. Their facilities are superior. There donors and supporters as numerous as any school in college athletics.

One must not forget, the little rabbit of politics runs around the program and the Athletic Director like no other program in the country at UT. Explore the job at Oklahoma with Texas. No comparison. Yes, you have to win at both places. But the extra duties that the Texas job requires is enormous. At OU, Stoops can live a life of not having to be out front 365 days a year. The Texas Head Coach cannot. Coach Brown excelled at that like no one else.

Coach Mack as the administrator of the football program at Texas is unparalleled. He is a nice man, a giving man, a players man, and most importantly, an honorable man. Sure, he could fire a coordinator with the best of them, but he did it with the program in mind. And he did it with his job in mind also. Top CEO’s have what Brown exhibited at Texas, They had the guts do what they thought had to be done. Yet he did it with class. Texas never had a problem finding people to coach, to replace those let go. His stamp on the program was his.

In the finality of his passing the torch to Charlie Strong, we shall see how being a “hard ass” coach fits in the politics that is Texas football. Strong has to win, immediately, or he won’t finish out his five year contract. I suspect that he must win the Big 12 Football title by 2015, two years. If the Horn’s are still mired in a fight for a top five in the league, Coach Strong’s past disdain for putting out, giving of himself in the little things, such as Coach Mack did for so many years, will end with a new coach by 2016. Hard no non-sense coaches like Strong, like Pollini at Nebraska, like Stoops at OU, have to win immediately, or there will be trouble. Look for immediate success at Texas for Coach Strong or look for a new program starter soon, very soon.

If an AD was smart, the first person that he should contact to coach his program would be Mack Brown. At his age, Coach Brown has years of coaching ahead and would make one hell of a good coach.  Fred Pahlke-January 2014