As the Big Twelve ramps into mid-season form, Texas beat Oklahoma in the Red River Shootout, West Virginia continued to remain undefeated, and Alabama stays atop of my National rankings after another win in the SEC, over Arkansas.

Texas won 48-45 and OU fires their defensive coordinator Mike Stoops. Yet Oklahoma outgained UT Saturday in the Cotton Bowl.  Texas is back for many, but I say hold your cattle herd until the season is over.  Texas might be back, and they might not be back.  As for Oklahoma, Ruffin McNeil will take the place of Stoops and that spells more of the same for the defense in Norman.  OU will have to win out, as of last year, to meet their goals of winning the conference.  Right now, with that defense, I do not think it will happen. OU has one of the most pitiful defensive teams, not only in the conference, but in the country, statistically speaking.  Bright points with OU is that they never quit Saturday, coming back from a three touchdown margin to tie the score at 45-45.  Again, when they tried to stop UT on that last drive, they could not.

What is Oklahoma’s problem on defense?  Yes, they cannot stop anybody.  That is a fact.

The players being recruited and signed for the Big Red are mostly wanted by all the major powers, on offense.  Not as abundant on defense and OU continues to bring in players that, for the most part, do not have that football mentality to actually put a whopping on the teams they play.  Yes, they will get a five star like they have currently starting as a freshman this year, Bookie Radley-Hiles, but the kid is small for the position. The kid is tough and is not a furious and ferocious hitter on every play.  He can “bounce off” his opponents when tackling.

Remember when Lou Holtz took over at Notre Dame after they fired the high school coach that was just terrible as a college head coach. Holtz told everyone that the Irish would stop signing players that were student/athletes, and start signing “football players” that would not shy away from the game, from hurting people (legally).  Holtz  would have a team that would not backdown to nobody.  It took a short time and Holtz transformed a weak Irish football team to one that would and did rival the Miami Hurricane.  His Irish were in fact tougher and meaner than Miami when they played. “Convicts (Miami) vs Catholics (Notre Dame)”, was actually “Convicts vs Irish thugs” and the “Irish thugs beat the Hurricane down in the only way possible, by being the tougher of the two teams.  Holtz recruited MEN that were on this side of the prison wall.  It lasted long enough for the Irish to win a National Title.  Holtz’s tenure got old, the Irish administration said enough, and they fired sweat Lou.  Notre Dame has not won another National Title since, now extending the past 30 years.

Sooners,  want to win another title (last one 18 years ago)?  How about getting some defense players that are football guys first, students second.  Bet you can find them and get these kind of recruits to sign.  Find the meanest and toughest men you can find, recruit them, get them on campus, let them get after it.  No women beaters I will say.  But guys that do not back down.  Recruiters can filter out these sorts of kids.  They are usually kids that are dominating on the field and follow the game as a way to the NFL and expect to make it and do not live in a fantasy world.  The Rod Shoate’s, Brian Bosworth’s, Braddon Everage’s can be found.   Get them to anchor the defense.  Currently OU has defensive players that will hit and bounce off of the opponents ball carrier.  OU;s defense is soft, small, and just does not have the type of player that can get the job done.  Fact of the matter, if you can not stop the other offenses of the Big Twelve,  do not expect a “Natty”.  Make sure those schools know they have been in a war and not a little girls paper doll activity, when thy play you.  Does anyone think Alabama’s defense, Auburn’s defense, or other toughies  in the SEC are soft? Heck no.  But Oklahoma?  Hell yes. OU is.

Oklahoma State is now 4-2 with their loss at home with Iowa State.  Watching that game, OSU’s pass defense was horrible, allowing the Cyclone receivers to run wide open for most of the afternoon.  That tells me that the Pokes have problems not only on offense (pass protection and run blocking)  but in pass defense.  Look for more losses to come this year.  As for Iowa State, they had to win this one and they performed well with a rookie quarterback with no experience.  Iowa State will upset someone this year. West Virginia and Texas, look out.

Baylor scored a nice victory at home over Kansas State 37-34.  I expected that win for the Bears and BU continues to improve. 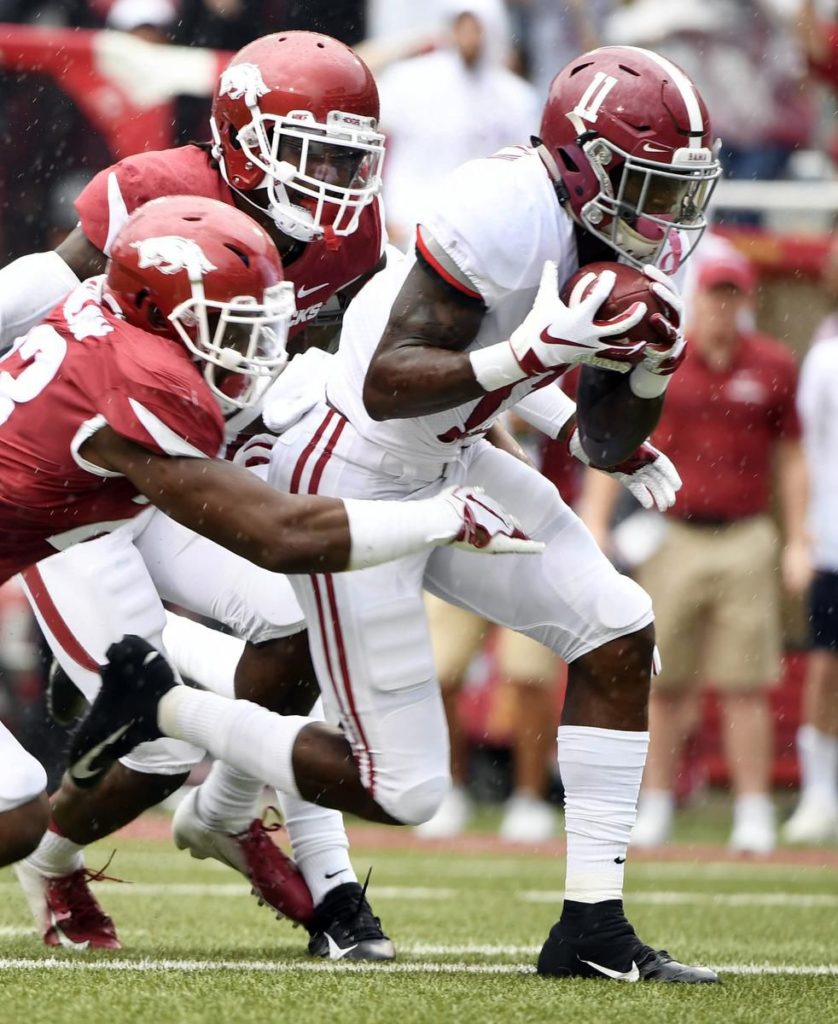 West Virginia should take Iowa State apart in Ames.  The boys from Morgantown 38 and the Birds 17.

Kansas State 38 and Oklahoma State 24-The Wildcats will fine holes in the Poke defense and OSU will turn it over a few times. For OSU to win, run the ball if you can.

Texas 34 and Baylor 25-If there is an upset in the conference it will happen in Austin. Baylor has the fire power to score and UT is back.  We shall see.  Texas folks, Baylor is much better than Tulsa so be ready.

TCU 43 and Texas Tech 21-With the hotshot qb out for this game for Tech, the Toads romp here.  If the hotshot plays, Tech might keep pace, for a while.  Could get out of control as Gary Patterson would like to run it up on the Tech coach Kliff Kingsbury.