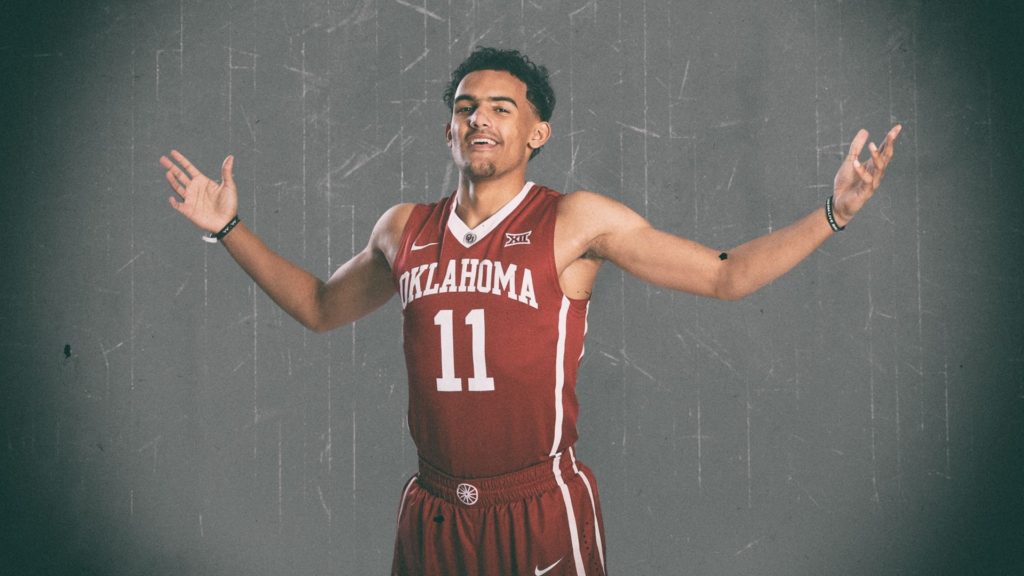 One and done for Oklahoma Sooners Trae Young, the freshman who led the nation in scoring and assists this year, a feat that no other college player has accomplished in the history of the game.  Young announced his intentions today, saying that it is something that he has wanted to do for a very long time, that is, play in the National Basketball Association.  The 6’2 point guard will be a lottery pick, probably falling anywhere between the sixth and the 12th pick in the upcoming NBA draft in April.  The move will make Young, at nineteen, a multi-million dollar man, as most suspect that his three year guaranteed salary is worth upwards of thirteen million.  If he goes higher than expected, the guarantee would be higher.  A decision that he could not turn down, Young  becomes the first one-and-done player at OU.  The Norman North high school star that decided to stay at home to play his one year of college ball within a few miles of his home, made a statement today, letting everyone in the basketball program at OU that he was appreciative of the year he spent playing for head coach Lonnie Kruger and his fellow teammates.

“I’ve been preparing most of my life to join the NBA, and that time has come for me now: After an unforgettable year at the University of Oklahoma, I will enter the June NBA draft and fully immerse myself in the pursuit of a pro basketball career.  However, I will regret that I didn’t help the Sooners win a national championship,” Young continued. “I have always wanted to honor the legacies of Wayman Tisdale, Blake Griffin and Buddy Hield, OU legends who led the program to Elite Eights and Final Fours. I wanted to take the Sooners the distance — all the way to a national championship. When I chose OU, I imagined I’d have more than one chance at the NCAA tournament, but things changed and this season became my only opportunity. In the end, I have to make the decision that I believe is best for me, but it doesn’t mean I do so without a heavy heart, without some regret that we won’t get to run it back together next season.”

Young’s statistics this year included points (27.4) and assists (8.7) per game, helping the Sooners earn an 18-13 record and reach the NCAA Tournament, where they fell to Rhode Island in the round of 64.

The decision, good or bad, was one that was made with business in mind.  The amount of money involved was just too much for Young to turn down, as was a three year guarantee in the NBA, allowing the Sooner star time to develop his game on the world’s best basketball platform.  It was a good move made by Young.

Feature photo:  AP-In this March 13, 2018, file photo, Oklahoma’s Trae Young answers questions during a news conference for an NCAA college basketball first round game in Pittsburgh. Oklahoma star freshman Trae Young is leaving for the NBA after a standout season. The 6-foot-2 guard averaged 27.4 points and 8.7 assists this season, and many projections have him going early in the first round. He posted the reasons for his decision on ESPN early Tuesday, March 20, 2018, saying he was ready to put in the work needed to play in the NBA. (AP Photo/Keith Srakocic, File)