College Football, College Sports, From the Past 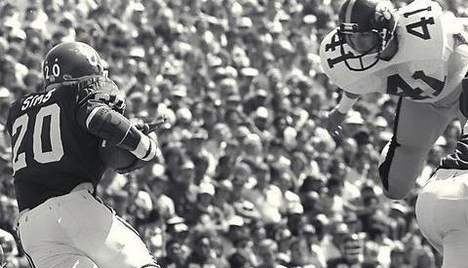 To qualify this ranking of running backs at Oklahoma, I have included only players that I have personally seen in person at the stadium or live on television.  I began watching Sooner football in 1958 and my remembrances go back to 1961.  With that, I have not included any player before 1961. This is the first part of a series of greatest Sooner football players by position.  Please comment on my lists and argue your best Sooner players.  There are no right or wrong rankings.   The lists, started with Joe Don Looney (10th best running back), will include offensive and defensive positions.  Statistics, abilities, and overall significance to the OU football program are all included in picking the ten, but when all things are equal, my personal preference is the tie breaker.

The final two great running backs in Oklahoma history, which I will rank number one and number two in this article, are Joe Washington and Billy Sims.  Both have distinct styles but when on a college field, they were always the most exciting game breakers on either side of the field.  Sims won the Heisman Trophy, while “Little Joe” Washington participated in two National Championship teams while in Norman.  Both had successful careers in the National Football League after leaving Oklahoma.  Both are Sooner legends of the highest order. 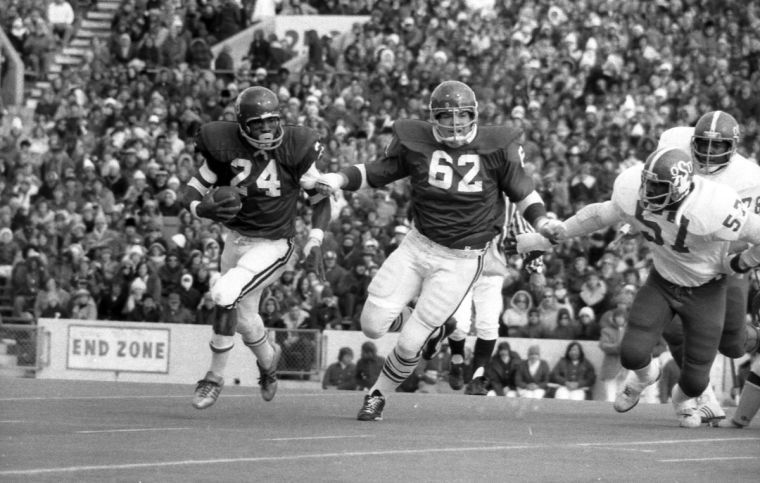 The punt return Joe Washington made in his second game of his career (1973 season) in the Los Angeles Coliseum against Southern California, the defending National Champs, was one of the greatest in the history of college football.  Taking a punt return, Washington ran the sideline, up and down, a whirling dervish that could not be contained.  Yet when the run was over, his total gain of a negative three yards was telling.  Greatest punt return and you lose three yards?  Little Joe became a college name that night as OU tied the Trojans, but the football world would recognize who was the best offensive player on the field, which contained a USC Heisman winner that night.  And the Sooner juggernaut that had been started by former Coach Chuck Fairbanks would grow into a full monster under the new Coach Barry Switzer.  That team would not be beat or tied for the betterment of three years from that night, finally losing in 1975 to Kansas. OU was dominate, on both sides of the ball, and in fact, the only team to really beat OU in 73, 74,and 75 was OU, fumbling that game away with Kansas. Add to the fact the Joe Washington was the most exciting player in the country on that team, OU dominated the country in those years, with two National Titles and two undefeated teams.

Joe Washington and OU would come off that loss against Kansas in Norman to beat Missouri in Columbia to seal another Big 12 title and set the team on it’s National Championship year.  It was  Little Joe making two fantastic runs late in that game to win it.  His touchdown run and a following 2-point conversion go down in OU history as two of the most impactful runs in Sooner history.  Washington never won the Heisman Trophy but that is alright. Those that were in a stadium when he played didn’t need a Heisman to know who was the best player they were going to watch that day.

Billy Sims most impactful run could have been his fumbling one against Nebraska in the 1978 regular season game in Lincoln.  That fumble cost OU a National Title.  But the effort he put into that run gave Sooner fans a way out not to lambast the Heisman winner on that day, as Sims was the man in his days playing for the Big Red of the South.  As talented as the man that would come after him twenty or so years later (Adrian Peterson), Sims running style was of power, moves, and pure speed.  Unlike Little Joe Washington who was the extreme “cutter”, Sims was a bigger back with more speed. Once Sims broke the line of scrimmage, he was gone. He also had a way of moving his legs in un-natural ways to avoid hits once he was past the defensive linemen.  Avoiding contact when needed or using his power to run over someone, Sims excelled in his position.

It would be easy for me to defer and say Washington and Sims were equally great runners at OU and to choose one over the other would be impossible.  Yes, but the final factor in choosing, comes down to those two plays Washington make in Columbia that short afternoon in 1975.  Joe made the plays, got OU over the hump on that bad grass at Faurot Field, and allowed the Sooners in win back-to-back National Titles.  Sims, the natural, fumbled against Nebraska on that Memorial Stadium turf in Lincoln.  Small picky differences, but that is the way I see it.

Little Joe Washington was the greatest Sooner running back I ever saw.  Billy Sims is a close second. 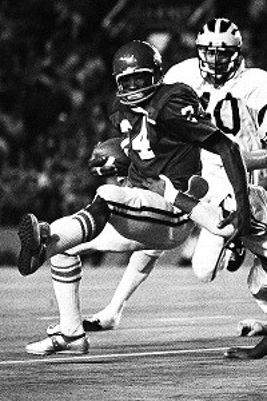 Joe Washington went on to a hall of fame career at Oklahoma and a career in the NFL. AP Photo

College Football, College Sports, From the Past

4 Responses to “Greatest Sooner Running Backs, Number One and Two: How would you rank Billy Sims and Joe Washington?”