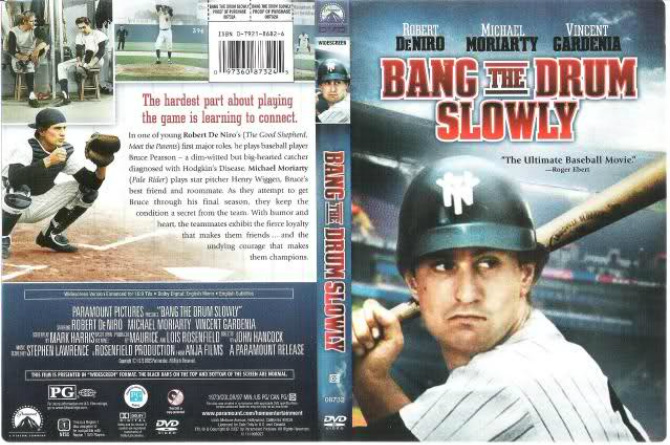 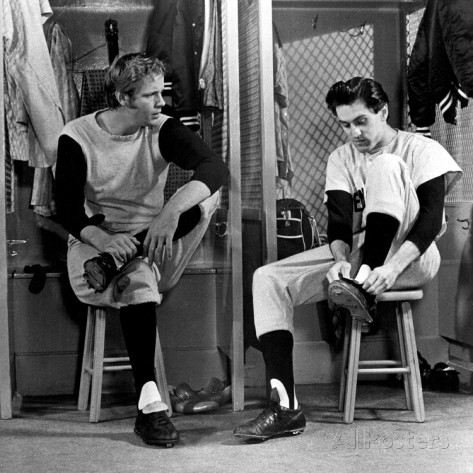 Al Pacino will tell you Bang is his favorite movie, sports or no sports. Bang the Drum did that to me the first time I viewed it and so I am in good company with Pacino having the same feeling toward this great film.

Production value is noting special. The baseball scenes are realistic, somewhat. Black and white here, a movie that comes from a novel by Mark Harris converted into a stage play that was on TV back in the fifties. A movie that many women will not understand what a man might see in it. A film not for everyone. But where other great sports movies are on the visual, Bang the Drum is on the emotional, and with a cast that can rival any in sport film, this movie delivers. There is something about friendship that is hard to explain. If you have a friend, not even a best friend, but an average run of the mill friend, throw in situations that in the course of life (and death) bring out humanity  and the interactions of relationships that are stronger than love and hate, more telling than mere words, display feelings of the human condition that can’t, will not, be shunned to the side. Real in fiction, a presence of being in the good, the perfect, and the immediate. For men to show emotion toward other men in a metaphysical way, you have a unique happening, even in a film of fiction.   In no other film has men’s relationship toward other men been so meaningful or eye-opening, on how we must treat others and how important it is not only for yourself but for the one you try to influence. It is not all about YOU or ME, but in the long of it, it IS about ALL of us. Yes, understanding what is cannot be understood.

The story is set in a real baseball world. It is not fake. The catcher, played by Robert De Niro (Bruce), has a fatal condition, and his friend, played by the under-rated Michael Moriarty (Henry) helps him through the season, his last. As underplayed by De Niro, he shows a deep range of the southern good old boy, not so bright, a daddy/mommy’s boy, a kind soul from a different place and time. At this early stage in his career, De Niro shows greatness in the presence of this role, one that doesn’t have to show his violent side. Kind of a forerunner of his more comedic and softer human nature roles that would follow, his work here is magnificent. On the other hand, Moriarty’s Henry Wiggen gets the choicer dialog, some of the most important words said in a relationship between two men, sport or no sport. Emotionally spent without showing it, this is Moriarty’s best screen role, and was Oscar worthy. An example of the interplay between Bruce and Henry:

Bruce Pearson: Everybody’d be nice to you if they knew you were dying.

Henry Wiggen: Everybody knows everybody is dying; that’s why people are as good as they are.

The last line of the movie by Henry on his feelings towards others:

Henry Wiggen: From here on in, I rag nobody. When you think of it, why do we “rag” on people? If we would just think before we speak, how wonderful the world would be.

The point?  Be careful when you develop relationships as you never know what the other person is going through, feeling, having to endure. Ragging, saying crude and unflattering things about people can be damaging, both to the person you are putting down and too yourself.

This movie has it’s moral sense set in concrete.

Tom Keogh sums it up in his review: Only those with ice water in their veins won’t get misty-eyed watching this moving film about the friendship of two professional baseball players, one of whom–in every sense–is playing his last season. A pre-stardom Robert De Niro portrays a rather simple-minded rookie catcher who comes under the wing of a veteran pitcher (Michael Moriarty). When De Niro’s character is diagnosed with Hodgkin’s disease, Moriarty tries to help him get through one more season.

Directed by John Hancock and based on the novel by Mark Harris (who also wrote the screenplay), the film builds on baseball’s ability to foster its own lore of courage, nobility, loyalty, and–sadly–tragedy. Watching the youthful De Niro and Moriarty, with all that promise in their bones, adds to the overall romance of the film today. Also appearing are Vincent Gardenia and Danny Aiello. A perennial favorite for many. –Tom Keogh Vincent Gardenia won the Oscar for best supporting actor in 1973 in his role of the manager in this film. Give me two hours and this film and I am all in.

FROM THE PAST: Phillip Seymour Hoffman Was One of the Great Ones