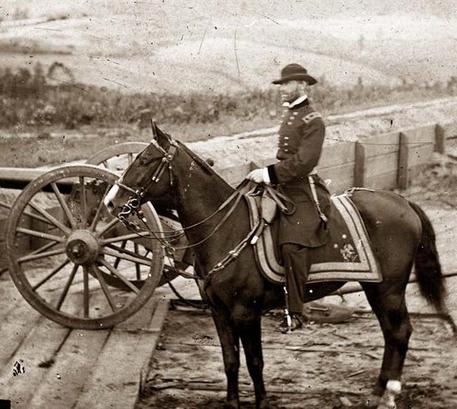 I have read various books on the Civil War, been to many places of hallowed ground that felt the death and pain of the men that fought terrible battles of our history, and visited many historical graves of the principals of the conflict of the Civil War.

Of all the main characters of the 1861-1865 fight, two men stand out as the most complex and interesting to study. The first, our 16th President Abe Lincoln, is a given. I think more books have been written about this great American than any other in our history.

The second, William Tecumseh Sherman, was just as complex a person, and in my opinion, just as important in ending the War Between The States.  And his influence and decisions have helped shape the nation as we know it today.  I might note, a great number of books have been written on him also. Sherman was a man that reflected the human condition in his time. He was most often unsuccessful in life, including business, family, and relationships. These negative facets of his life were offset by his success in waging war.

WTS was a warrior leader and somebody we could dearly use today in all the messes we have in this nation of ours. He was a man that could right the wrongs of our various leaders of today, moving this nation to a place of strength and not weakness.

Sherman’s famous quotes of his time over one hundred fifty years ago are apropos today. His beliefs on war and the world in general were more sophisticated and visceral than any person our two hundred years plus as a country. Sherman was resolute in his beliefs. If our leaders would reflect on his ideas, we as a nation of good over evil, might benefit. 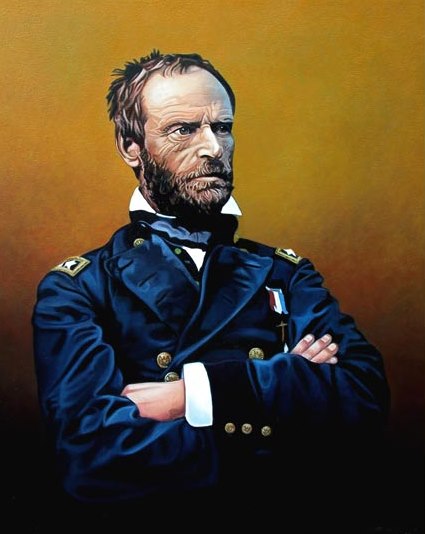 Some quotes that give you a sense of what General Sherman was all about included:

In our Country… one class of men makes war and leaves another to fight it out.  My aim then was to whip the rebels, to humble their pride, to follow them to their inmost recesses, and make them fear and dread us. This war differs from other wars, in this particular. We are not fighting armies but a hostile people, and must make old and young, rich and poor, feel the hard hand of war.

War is at its best barbarism.

I know I had no hand in making this war, and I know I will make more sacrifices today than any of you to secure peace

I would make this war as severe as possible, and show no symptoms of tiring till the South begs for mercy

If I had my choice I would kill every reporter in the world, but I am sure we would be getting reports from Hell before breakfast If the people raise a great howl against my barbarity and cruelty, I will answer that war is war, and not popularity seeking

In reading about Sherman some important beliefs come to mind.

Sherman hated war and wanted the Civil War to end as fast at it could. He believed that war should be fought in a hard and deadly fashion. He believed war was between two groups of people and he coined the term “modern warfare.” When Sherman’s army took its’ famous march through Georgia and North Carolina, he wanted to make “Georgia howl.” Going into a town or community during the march he would burn it if citizens of the town had anything to do with guerrilla warfare against his army. He would, at last resort, line up citizens and shoot them if need be. On the other hand, if the town didn’t wage war against his army, he wouldn’t burn it down, just taking anything of worth to his army. Sherman’s modern warfare, or total warfare, was used during World War 2 as when thousands of Allied bombers would incinerate a German city without regard to civilian deaths, such as the 22,700 dead men, women and children of Dresden.

Sherman’s army was ruthless in killing their enemy, and in making his enemy fear them. Sherman’s Union Army of the West was the greatest army the world had ever seen at the time. They were, in brutal terms, young, tough, hardened, and finally, deadly killers.

The newspapers (media today) were looked as the devil in Sherman’s mind. He hated newspaper men, thought they were the enemy, said they were like spies.  Right or wrong, today’s president hated the media as Sherman did in his time.  Leaders always hate on the media if they do not tell the story as they wish.  That is not new.

Sherman could have been President of the United States but in the above quote he had no interest in the job.

He was not a racist but in truth had issues with the competence of the black man. Fact is, his actions helped free the black man in this country. To contrary belief, WTS held the American Indian in high esteem, as part of his name and one of his children honored the great Indian leader with that name too.

It was said he burned Atlanta to the ground, which was not true. Southerners didn’t hate the man as many might believe. Point in fact, Sherman was the first president of LSU and loved living in South before the war. He counted my Southern leaders and future Confederate generals as friends before and after the war. During the war they were his enemy. After the war Sherman, who lived in New York City, would give handouts to needy veterans of the war, both Union and Confederate.

Sherman was credited for saving countless American lives on both sides for ending the war sooner than later. His brutal warfare helped in getting the conflict to end.

Sherman was respected by his men, but was also respected by the Confederate’s he fought in battle. Reb General Joe Johnston, Sherman’s opposing foe in the war never forgot the magnanimity of the man to whom he surrendered, and would not allow an unkind word to be said about Sherman in his presence. Sherman and Johnston corresponded frequently and they met for friendly dinners in Washington whenever Johnston traveled there. When Sherman died, Johnston served as an honorary pallbearer at his funeral; during the procession in New York City on February 19, 1891, he kept his hat off as a sign of respect in the cold, rainy weather. Someone with concern for the old general’s health asked him to put on his hat, to which Johnston replied “If I were in his place and he were standing here in mine, he would not put on his hat.” General Joe Johnston caught a cold that day, which developed into pneumonia, and he died several weeks later in Washington, D.C.

Our current presidents, Trump, whomever wins in 2020, and his/her,  advisors, have to make smart choices in this world of evil.  They need to make choices as Sherman and Lincoln and Grant made in the Civil War. A choice to win. President Lincoln and his two Generals were leaders that had  moral backbones, something that many of our leaders lack today.

Point in fact: Generals Grant (Army of the Potomac and then General of the Army) and General Sherman (Army of the West) had more authority than Generals of today, and could wage war with the goal of winning it,  Before President Trump, the Generals that Obama, Bush, Clinton, and Bush commanded lacked an autonomy of waging war with restraints on their soldiers and how they engaged the hostiles.

William T. Sherman was in fact, the most powerful man in the United States just days after the Civil War. US President Johnson and US War Secretary Stanton believed that Sherman had intentions of crossing the Potomac River with his Army of the West just days before the great celebration parades in Washington DC and take over the nation. They believed that the Army of the West would engage Grant’s Army of the Potomac in another Civil War fight, as Sherman’s men would do anything he told them to do.  President Johnson believed that Sherman would, in fact, name himself King or Minister of the Nation after beating Grant’s Army.

Sherman’s disdain for the American leaders just after the war ended is noted historically and point in fact, Sherman’s army had enough men and fire power to defeat the “other” Union Army (Army of the Potomac).

Sherman was infuriated with Johnson and Stanton with regard to “surrender terms” that he, Sherman had given the Confederate Army of Joe Johnston. The President thought Sherman was too easy on the Rebels and forced Sherman to resend them and make them harsher.  Sherman could have taken over the country, by force, and that Sherman was not only the most powerful man in the United States at this critical moment of our history, but also the most popular, even more than the great General Grant.  Sherman, in the end, did duty as an American military officer, and said no to his possible take over in Washington DC.  His respect for his old friend US Grant was too strong for him to go to war against him and the other US Army. 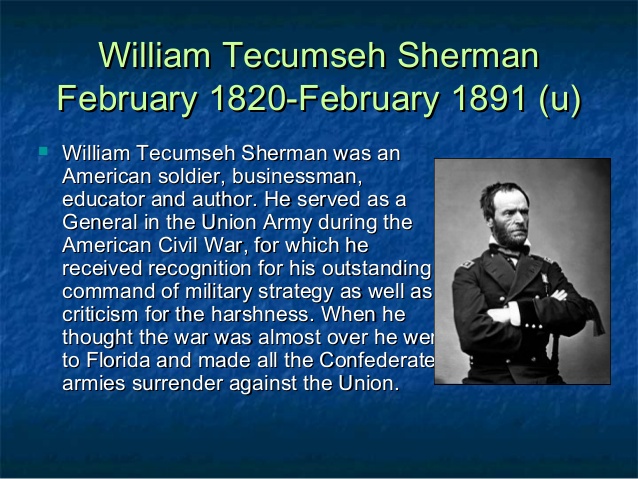