Sooners screwed by officials with on-side’s kick call?  Hell, who knows? The Big Twelve sure the hell does not….. 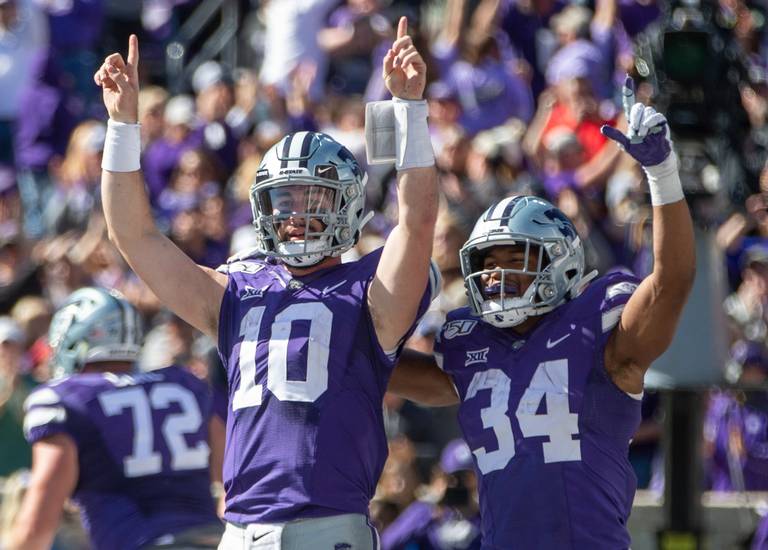 With Oklahoma’s loss at Kansas State Saturday, the Big Twelve Conference has only one undefeated team, the Baylor Bears.  By losing to the Wildcats, OU needs to finish their regular season conference schedule without another blemish as one more defeat could put the Sooners out of the Conference title game in Jerry’s World in December.  Baylor, on the other hand, has the luxury to taste a loss and still make it to the title game. Can the Bears beat OU and Texas in the next weeks is iffy.   The Bears have both games at home in Waco to make the games winnable.  Baylor is good, but to go undefeated for the regular season and conference slate is asking a lot.  Right now, the Big Twelve race is open and Baylor and OU are the probable teams for a championship in 2019

Here is what the contending teams have to contend with in the final weeks of the conference season:

Baylor-  West Virginia (H); TCU (A); Oklahoma (H); Texas (H); Kansas (A)  The Bears need to win two of three against TCU, OU and Texas to guarantee a slot in the title game.  The TCU game in Fort Worth will be a bitch as the Frogs continue to improve finally solving their problem at quarterback.  Baylor will end 11-1 and make the title game in my opinion.

Oklahoma- Iowa State (H); Baylor (A); TCU (H); Oklahoma State (A)  The Sooners should win out but of the four games left, an upset is possible as of the defensive showing in the Little Apple.  You cannot trust it.  Good thing for OU is that to beat them you will need to score in the high 40’s as this Sooner team is going to get their points.  My opinion is that OU does win out and makes the title game against Baylor. Not a stretch by any means.

Kansas State- Kansas (A); Texas (A); West Virginia (H); Texas Tech (A); Iowa State (H)  The Wildcats could make the game if two things happen. OU gets beat and the Cat’s win out.  It can be done but KSU will not have an easy ride with Texas in DKR and Tech in Lubbock.  But you can mark it down that the Wildcats will not surprise any of their remaining foes.

Iowa State- Oklahoma (A); Texas (H); Kansas (H);  Kansas State (A)  The Cyclones have a remaining schedule that does not give them an easy path to the title game.  First, they must win out.  With OU in Norman, and a road visit at K-State, not to forget the meeting with Texas in Ames, the Clones’ have just as much a chance to finish in the middle or lower part of the standings as getting to Arlington.  A disappointing year might continue for this team.  If they win out, they still have a chance.

Texas-  Kansas State (H); Iowa State (A); Baylor (A)); Texas Tech (H)  The Longhorns have been, with Iowa State, the most disappointing team in the league so far.  With two loses in conference play, they also must win out to make Jerry’s World.  With the injuries and spotty play, that is a task that this team is not really cut out for.  Hell, UT could lose every game left on it’s schedule.  A total train wreck in Austin.

TCU-  Oklahoma State (A); Baylor (H); Texas Tech (A); Oklahoma (A); West Virginia (H)  The Horned Frogs are coming on and now with that they have found Max Duggan, freshman quarterback sensation, they have a chance to continue to improve.  Will that  transition into wins?  Maybe.  With the two conference loses, they are cannot lose another conference game to make the game in December.

Big Twelve Predictions for the week:

Baylor will handle West Virginia with ease on Halloween.  Bears 32 and Mountaineers 20 is the way I see it.

Kansas State travels down to Lawrence and beats Les MIles upstart Jayhawks.   Let us go with the Wildcats 41 and Kansas 14.

Oklahoma State hosts TCU in the best game of the day in the Big Twelve. Anything is possible here.  I have the Frogs in a tight one 37 to 34.