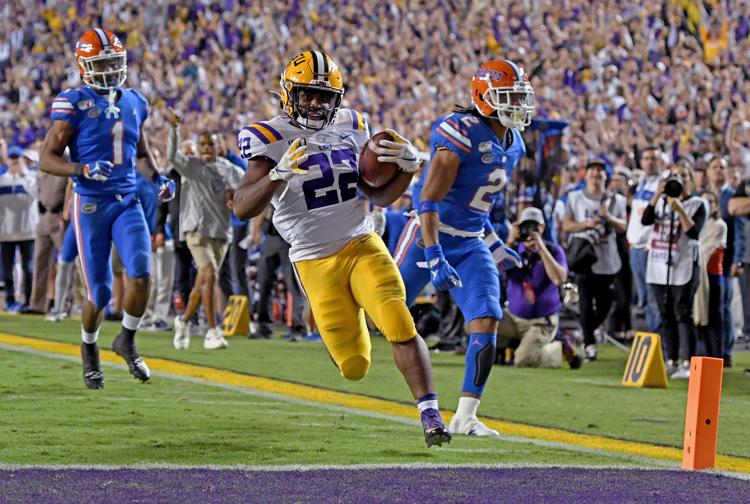 Feature photo: LSU running back Clyde Edwards-Helaire (22) crosses the goal line to score on a long run as Florida defensive back CJ Henderson (1) and Florida defensive back Brad Stewart Jr. (2) give chase during the first half of LSU’s football game against Florida at Tiger Stadium Saturday Oct. 12, 2019, in Baton Rouge, La.

Oklahoma’s trouncing of Texas and LSU’s winning recipe over Florida in the Swamp have proved without a doubt that these two teams will challenge Alabama, Clemson, and Ohio State for the Final Four later in the season.  Penn State also remains in the conversation with their win at Iowa and Wisconsin will give both the Buckeyes and Nittney Lions a run for the Big Ten title.  Currently, I have these teams ranked like this with my current Top 25.

My Final Four prediction after week 7

OU was much the better team than Texas.  Sooners have found a defense too.

Iowa State is finding themselves on offense and West Virginia lost it’s quarterback in the loss.

This week in the Big Twelve

Oklahoma begins the day in Norman with a Roster start with West Virginia.  The Mountaineers will be blown out.  West Virginia’s quarterback Austin Kendall is questionable as of Sunday.  Sooners 59 and Mountaineers 20

Kansas State will get the better of TCU as the Frogs are not very good this year.  Wildcats win 24 to 20.

Kansas visits DKR and the Texas Longhorns snap back with a 41 to 14 win.

In the Iowa State trip to Lubbock, the Cyclones will have a tough one but should come out the winner.  I like the men from Ames 28 to 24.

KEY GAMES of the WEEK