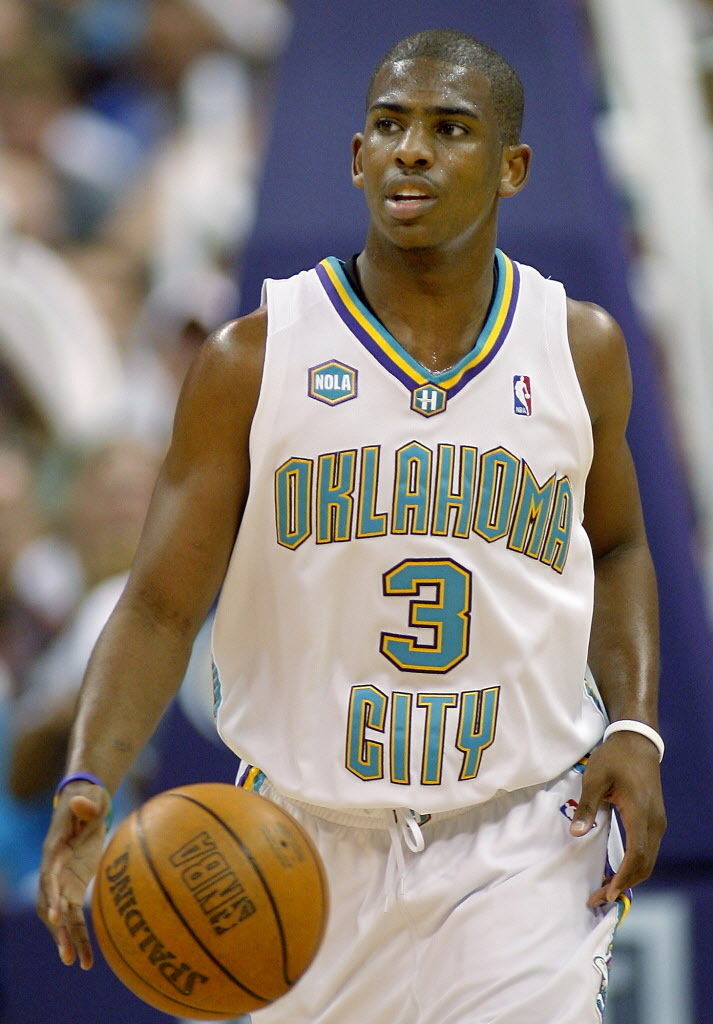 Chris Paul as an OKC/NO Hornet (photo found at reddit.com)

Chris Paul came to Oklahoma City to play in my city when the New Orleans Hornets had to relocate the franchise from the Big Easy as of the devastation from the hurricane Katrina back in 2005.  The Hornets and Paul ended up playing on Reno Street for two seasons, giving OKC their first taste of major league professional sports.  He became the first “home grown” star of a major sports franchise located in OKC and his two years provided this city and state something to crow about.  I have been a Paul fan ever since those first games he played as an NBA stalwart.

After his sophomore year at Wake Forest (with final averages of 15.3 points, 4.5 rebounds, 6.6 assists, and 2.4 steals per game, Paul was a First Team Consensus All-America), Paul became the fourth pick in the 2005 draft.  Paul was with the Hornets in his rookie year being the NBA’s Rookie of the Year and named the Western Conference Rookie of the Month, for every month of the season as the team finished 38-44 for the year.

When he arrived in OKC on his first NBA contract with the Hornets, Paul was already a grounded and grown up young person.  He bought a home in the suburb of Edmond OK, just a short distance  from my modest abode.  With his brother living with him, the two were just average guys living a quiet modest lifestyle as he played out those first two season.  He did not have the need to live the high life here (and yes, you can find it if you want in Metro OKC).  He had been taught from family the need to fit, and Edmond was the perfect place to do so, as many Thunder have in the past eleven years. It is not unusual to run into Thunder players and front office people in my neck of the woods.  Paul has always conducted himself on the up-and-up in his personal dealings in life and being out in the world.  He started his out-of-college life with a strong work ethic and personal integrity.

Paul on the court is a tough guy and has been that kind of player since college  and before.  Remember the game he kicked another player in the nuts while at Wake Forest?  He has always had a “mean” side on the court and was never afraid to show it or back down.  That fortitude has been a positive for this future Hall-of-Famer.  You put a Paul on your team and you get a highly gifted player in many aspects with his physical abilities and his basketball IQ.  If there is a smarter player in the league show me.

Paul has issues with the game too.  That is not unique with the best players.  Being the best/smartest player on the courts he sometimes allows his lack of patience with team-mates give issue. He does not avoid conflict with anyone, yet unlike others, works at getting the best from those that play with him and is not “personal” with his teammates.  He is very coachable and will follow coaches direction.  As for mentoring the younger player, that is could be suspect, yet it is my opinion is that he would make one great head coach in the league in the future. He has what great coaches in the NBA have.  He can demand authority and that is something that comes with your personality. Paul, in time, I believe, will be a head man in this league.

OKC needs to use Paul’s better qualities while he is with the Thunder.  Give him the power to run Billy Donovan’s system as a coach on the floor. Paul can transition into a role with the Thunder that can make the newer players into professionals that honor the game with “old school” play.  As of the great Russell Westbrook, Paul has what it needs to be the leader on this team.  Billy Donovan must recognize that and use Paul as an asset while with the team.

That’s the way I see it sports fans.