The SEARCHERS; STAGECOACH; RED RIVER; THE GOOD, THE BAD AND THE UGLY; AND THE WILD BUNCH RANK TOO! 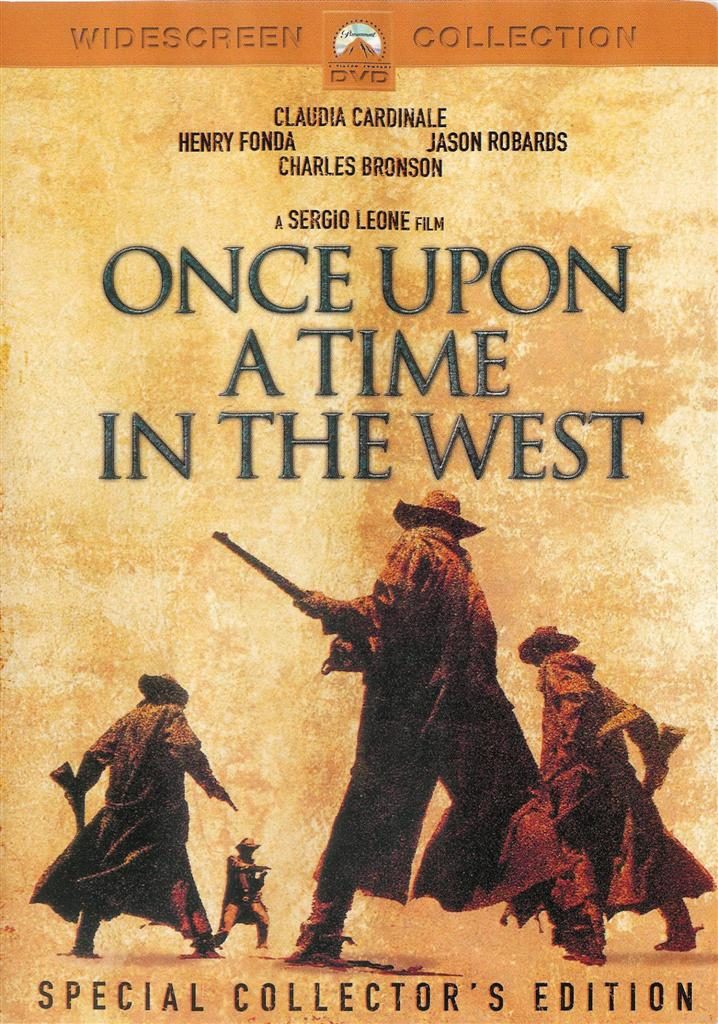 Every few years I take a view of the greatest western flicks that were ever made.  Today, with time to watch a flick at home as of the terrible selection at the local cinema in the Oklahoma City metro, I pulled my 2003’s collectors DVD copy of “Once Upon A Time In The West”  (above).   Directed by Sergio Leone, this happens to be one of the few films that can be called “the best” western ever made.  In company with John Ford’s “The Searchers” and “Stagecoach”,  I would include two others in the “best” ever made category, Leone’s  “The Good, the Bad, and the Ugly”, Howard Hawks “Red River”, and finally Sam Peckinpah’s ” The Wild Bunch”.  Other can be included but that is of personal choice. 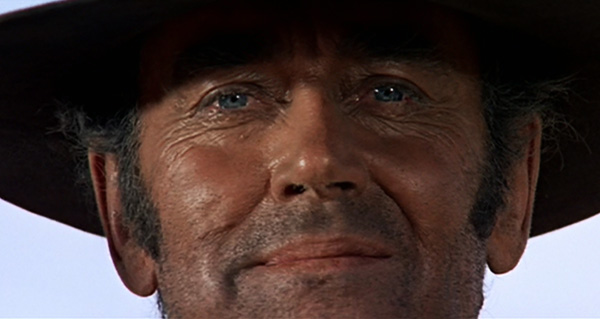 What can you say about “Once Upon a Time in the West” that has not already been said?  Actually, only personal thoughts matter here as those that study film have a honest perspective of this masterpiece by Sergio Leone. 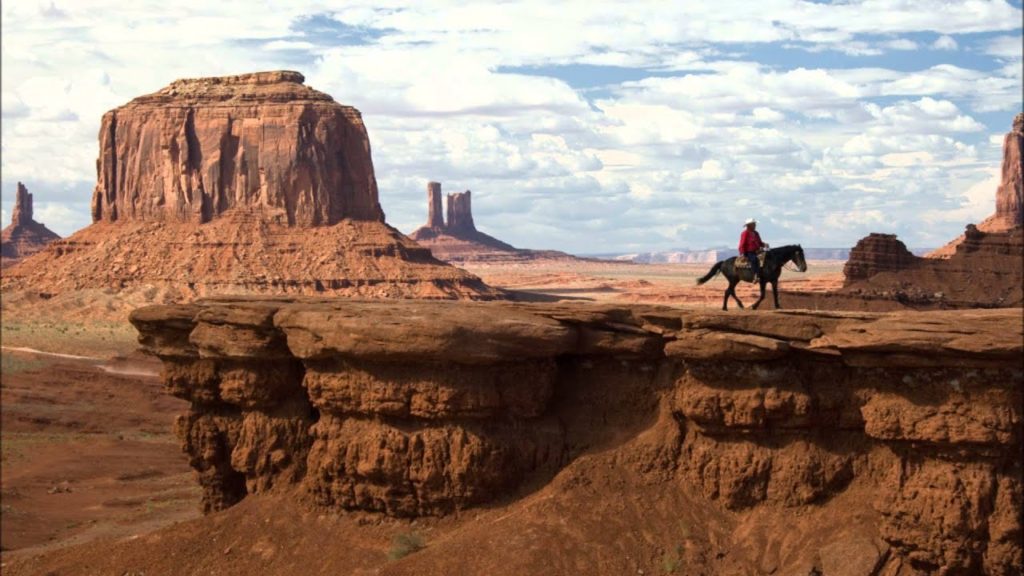 First, anyone that views this film has to understand that you are in for a long ride of almost three hours.  Director Leone will take you through familiar territory yet bring to your viewing an honorable version of what you have already experienced by many of the great directors in their past films.  Leone borrows from others but he reconstitutes fresh produce and throws away anything stale.  If you are in a hurry, this flick might not be for you. But why be in such a rush to get through a film so full of what film is all about?  Enjoy the fruit and savor the flavors of what you have been given. 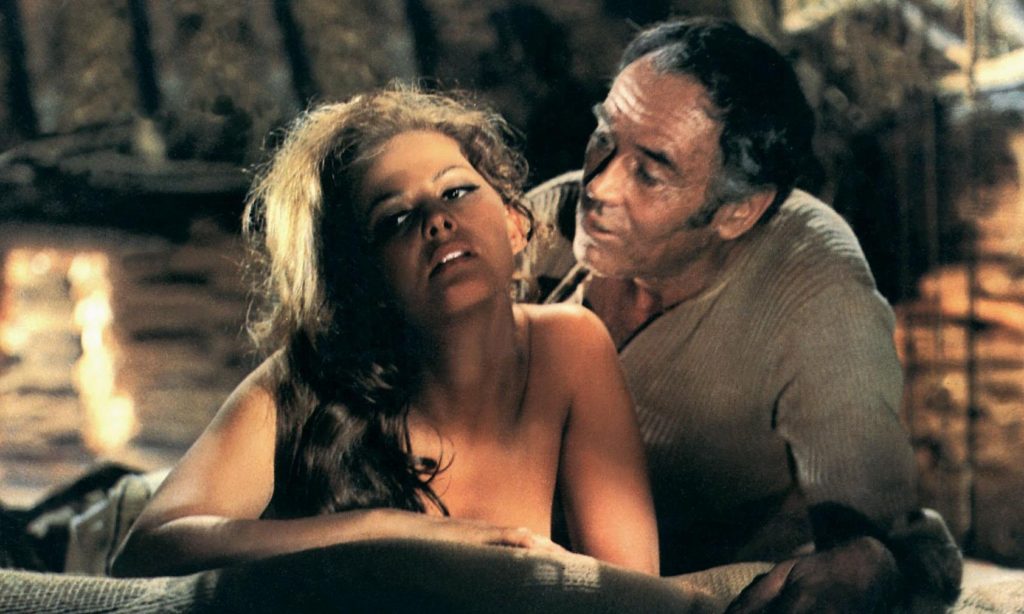 The set pieces of this film have been studied and picked apart by many, critics and the serious filmaholic alike.  Leone constructed this film to be cherished.  The best directors of today pay tribute to this director, understanding that Leone has a reason for what he does with film.  Quinto Tarantino will refer back to what he has taken from this great director to process his nuances in filmmaking, such as  in the wonderful “Hateful Eight”.

The film is not unique in its concepts but is totally one-of-a-kind with regard to the way it has been conceived and structured.  Shot by cinematographer Conrad Hall, we have another film master at work, making the visuals as breathtaking as a chokingly hot and dusty western world.  The land plays a significant role in this one.  As QT used the vast cold western scenery of his “Hateful Eight”, Leone and Hall used the expansive dead dry western vistas as a “character” of the “Once..”.    As the railroad is being constructed to connect the country, east to west this backdrop could not be a better look at the expanding nation of the time.  Just as QT used the stagecoach in his film with the wide Panasonic lenses he used.  Hall has done his job putting the water stop Sweetwater on the map for the trains to refresh as QT used the road house to let his film play out on a closed in stage set.

Enrico Morricone’s musical score completes this film.  He has scored   other films but not better.  Each major character has his (or her) own theme.  Leone had Morricone score the film before the shoot and then played the music as the filming was taking place.  The enhances the visuals and emotional scope in a major way as the mood of the film viewer is allowed to roam in a different human sense.

Leone’s characterizations of the principal actors through what you see and not what your hear in dialogue allow for you to consider and contemplate the film without unnecessary verbiage,   Plus sense of foreboding violence about to explode, but not knowing the exact second the killings will begin, bring a suspense to this western.  The first eight or so minutes of the film with no music yet the natural sounds of the setting are masterful before the killings of the three thugs by “Harmonica”.

A movie of a time when films could care less about political correctness.   A  liberal slant against “capitalism” is noted with all the evils of money and the greed that brings murder and manipulation for personal gain.  This is a movie about big boys that deal with real issues that bring high capital gain through murder and corruption. Nothing was new in the 1880’s as in today’s 2010’s.

A touchy feely world for the woman (Claudia Cardinale) as she makes out with the evil Henry Fonda in a rather strong bedding scene where his all out devilish character is shown to be human.  A psychopath with goodness?  Not really.   He is still a woman and child killer without conscience.  Yet he does have a love of screwing. Men will be men if given the opportunity.

Fonda playing his first bad guy role shows a versitality that he had not been given the chance to play before.  He was up to the task and Leone made his shave his beard and take out his brown contacts to play this cold blooded killer as a clean faced blue eyed shark of the sea.  In fact this was the first film that the lead in western is not the good guy.

A film that has Jason Robards putting forth a screen presence that steals all his scenes.  He is a likeable bad person, someone that could be your friend.  You feel for him when he is dying and asks Harmonica for some privacy to pass without being looked at.  One of few characters you actually felt some positive emotions for in this less than nice people flick.

Leone chose Charles Bronson as the smirking, deadly serious gunman that is out to get the man that killed his brother. Clint Eastwood and James Coburn could have had the part but that did not happen. Bronson turned out to be the man here as “Harmonica”.  Just enough strength to match Fonda’s Frank as equals.   In some way, another cold blooded killer, maybe not as evil, but just as much a rapist as they come.

Claudia Cardinale’s Mrs. McBain, a beauty with the brains to figure out that there is more to the man/woman relationships than just an occasional fuck.  On one had, she makes love to evil Frank (for her protection), expecting another suitor (Harmonica) to right the wrong that Frank did to her family.  She would be good with that,  allowing men to be men with all the misogyny that was ever present in the old west.  She is strong but understands that she cannot stop a man that is determined to have his way with her.  Hell, she was a former whore from New Orleans.  You get what you get here.

OTHER GREAT FILMS OF THE WEST

What films can be considered the greatest westerns of all time?  In company with this film, Ford’s “The Searchers” and “Stagecoach”, which many critics believe are two of a select few that can hold that title. I would include two others in the “best” ever made category, “The Good, the Bad, and the Ugly”, another Leone film, Howard Hawks’ “Red River”, and finally Sam Peckinpah’s ” The Wild Bunch”.

As a reference, here is my list of the greatest westerns of all time, taking into account critics preferences and my personal likes and opinion.

With the great directors represented above, the western as film/art is a  directors medium.  Even actors play second fiddle often.  For every John Wayne or James Steward, you have a John Ford or a Sam Peckinpah.  A Gary Cooper and Randolph Scott for a Howard Hawks and Sergio Leone. You get the picture.

HIGH NOON AND HOUR OF THE GUN NOT MY FAVORITE WESTERNS

There are two flicks that might give conversation that I do not like at all. “High Noon” as I never bought in that Gary Cooper and Grace Kelly could be man and wife.  Fred Zimmerman is a “good” director without question, but “High Noon” is just not my cup of tea.  It is not a visual film and suffers from a worn out Cooper with a babe like Kelly.   Sure, it won four OSCARS out of seven nominations, but looking at the Best Picture that year and you can see that it was a very weak year (1952).  And John Sturges’s  and his “Hour of the Gun”. It put me to sleep. It was pitiful.  James Garner playing against his type cast as Earp was just did not work for me. Lack of charisma.

Currently I have reviewed 249 westerns as of April 2019 with reviews. You can find my Top 50 at: https://letterboxd.com/fwpahlke/list/the-best-westerns-i-have-viewed/