Featured, From the Past, Home, Latest, NFL 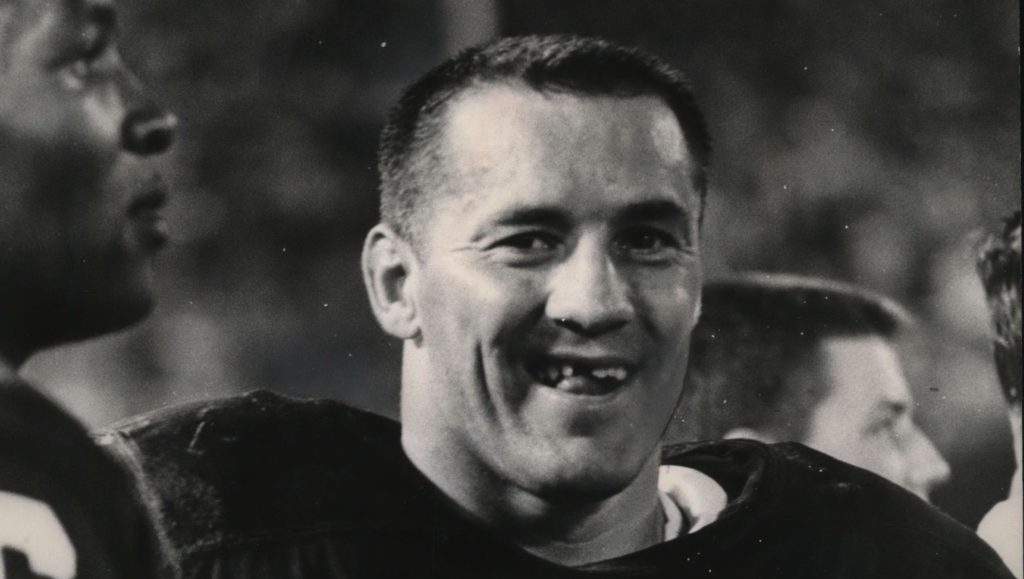 Hall-of-Fame fullback Jim Taylor of the Green Bay Packers passed away yesterday at age 83.  Taylor died unexpectedly Saturday at a Baton Rouge, La., hospital, the Packers said.   What Ray Nitschke was to the defense of the Packers was what Jim Taylor was to their offense.  Their soul.

Powerful with toughness and a drive to demolish the opponent when confronted with physicality summed up Taylor.  He was my favorite player on Green Bay in the late 1950’s and 1960’s.  His career spanned from ’56 to ’66 and was the all-time leading rusher when he departed the team after his nine year career.  That record lasted for generations.

The fact of the matter is that Taylor is considered as the greatest fullback in NFL history and his running the ball did not take a back seat to the thunderous blocks he delivered to opponents. No running back was as devastating as Taylor in making crushing blocks in the league, yesterday and today.  Taylor was without peer in his play.

“The Green Bay Packers family was saddened to learn of Jim Taylor’s passing this morning,” Packers President/CEO Mark Murphy said in a statement. “He was a gritty, classic player on the Lombardi teams and a key figure of those great championship runs. One of the best runners of his era, he later was greatly appreciated by multiple generations of Packers fans during his many returns to Lambeau Field with his fellow alumni. Our deepest condolences go out to his wife, Helen, and their family and friends.”   (Michael Cohen, Special to PackersNews)

If you read my “back-in-time”  blog articles, many will know that the St. Louis football Cardinals was my team growing up in Oklahoma City in the 1950-1960’s era of the NFL  Yet, the running backs of my youth that I followed intensely week to week were Gayle Sayers of the Bears, Lenny Moore of the Colts, Cookie Gilchrist of the Bills (AFL), and Jim Brown (the greatest football player of all-time) of the Browns.  Included in that small group was Jim Taylor.

Taylor had the qualities of each of the afore mentioned HOF players.  Not as fast or as elusive as Sayers or Brown, Taylor was as tough as any.  Getting him tackled on runs, he was as effective as any, including Sayers or Brown.  Taylor would use his power to run and punish you as a ball carrier. He would and could hurt you on every play, running with the ball or blocking for Paul Horning or pass protecting for Bart Starr. Taylor did not want to avoid contact, he initiated it. He dished the pain out and suffered from it too.  Looking at Taylor in a game you saw the blood, the cuts, the abuse he got and gave.  He was fun to watch as much as I enjoyed Sayers to dance and slice and Jim Brown as he used his powerful body to outran or through those that tried to stop him.

Taylor had the greatness of Sayers and Brown, of Gilchrist and Moore.  He would get that one or two tough yards in a tight must situation.  Bart Starr would use his fullback, Mr. Taylor,  and never contemplated he would not get that first down, behind a Jerry Kramer led offensive line. It was above reproach.  Green Bay was not to be denied.

Packer coach Vince Lombardi, on comparing Taylor and Jim Brown.  “Jim Brown will give you that leg and then take it away from you. Jim Taylor will give it to you and then ram it through your chest!”

Taylor was as much the NFL of his time as any player, offense or defense.  Today’s league is not like the league of the past.  The toughness of the player as demonstrated by Jim Taylor, is just not on stage today by very many current players. For every JJ Watt of the game today, there were ten Jim Taylors.

For those that did not have the honor to watch professional football in Taylor’s day, you missed football at it’s finest.

Today’s game does not compare. 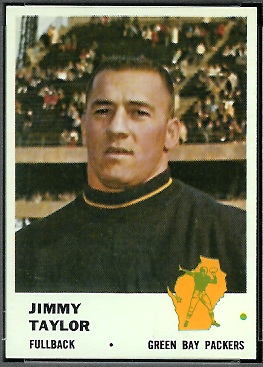 Jim Taylor at a glance

School: Louisiana State University, where he was an All-American in 1957. Taylor played two years of college football (1956 and ’57). He rushed for 762 yards and 12 touchdowns in 1957 and finished his career with 1,314 rushing yards and 20 rushing touchdowns. Taylor was drafted by the Packers with the 15th pick in the second round in 1958.

Post playing career: Taylor finished his career by playing one season with the New Orleans Saints in 1967. He rushed for 390 yards and scored two touchdowns. Taylor was known for staying in tremendous shape post-football. He ran marathons well into his 50s and competed in multiple editions of the Superstars competition that pitted some of the world’s best athletes against each other in various sporting events. Taylor also was president of the United States Rugby League, which announced plans for a 12-team league in 1968. He was diagnosed with Hepatitis C in 1989 but the condition eventually went dormant. Taylor resided in his hometown of Baton Rouge.  (source:  Packersnews-USA Today)

Feature Photo:  Green Bay Packers Jim Taylor runs with a Bart Starr pass as Dallas Cowboys Mel Renfro (20) leaps high in air too late to break up the pass during the NFL Championship game, Jan. 1, 1967 in Dallas, Tx. At left is Cowboys Chuck Howley (54). The Packers defeated the Cowboys 34-27. AP

Featured, From the Past, Home, Latest, NFL