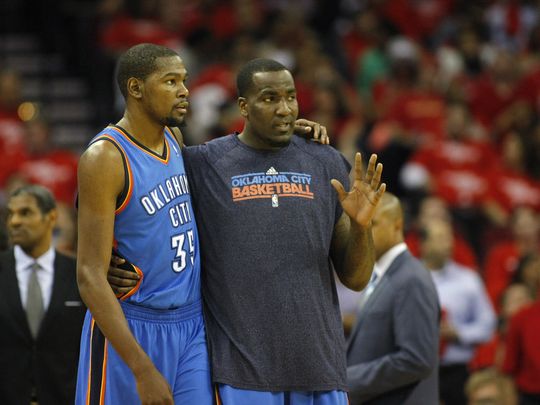 Kevin Durant talks to Kendrick Perkins during a timeout against the Houston Rockets in the 2013 playoffs. (Photo: Brett Davis, USA TODAY Sports)

Ever wonder why the Cleveland Cavs signed veteran center Kendrick Perkins as a seldom used post player at the end of this current season? “Perk” was not going to play a role on the floor, did he not?  His specific job in Cleveland was to be a inspirational un-named “coach” on the bench, utilizing his experience in bringing a toughness and a valuable piece in getting the Cavs to be better in their post game with their “bigs”.  Fact of the matter, Perkins is one of the smartest and most complete teachers of paint play and will be an assistant in the NBA in a very short time.  His ascension to the head coaching position is just a matter of time.

Perkins has had offers to retire from the game and begin his bench coaching career.   I expect that he will if fact hang’em up this summer and be a member of an NBA staff by the opening of the 2018-19 season.  It does not hurt that Perkins is best friends with Lebron James, Russell Westbrook and Kevin Durant.  That power of association is significant in attaining  a coaching job in the Association.  Without James’s input, Perkins would not have been with the Cavs this playoff season.

Perkins made news during the NBA Finals with Golden State, and his personality is always on display.  He can be the “enforcer”.  But the fact is that he is more mouth than bite as he is highly thought of by franchises, coaches and players alike.  He has a great understanding of the chemistry of a team and with his knowledge of the game, expect success in his next career.  A Perkins team would be well-coached, tough in on-court work, and will give a franchise the edge needed to be a winner.