Sam Presti has some major decisions to make in the next few weeks……..OKC Loses to Utah Jazz in four…….. 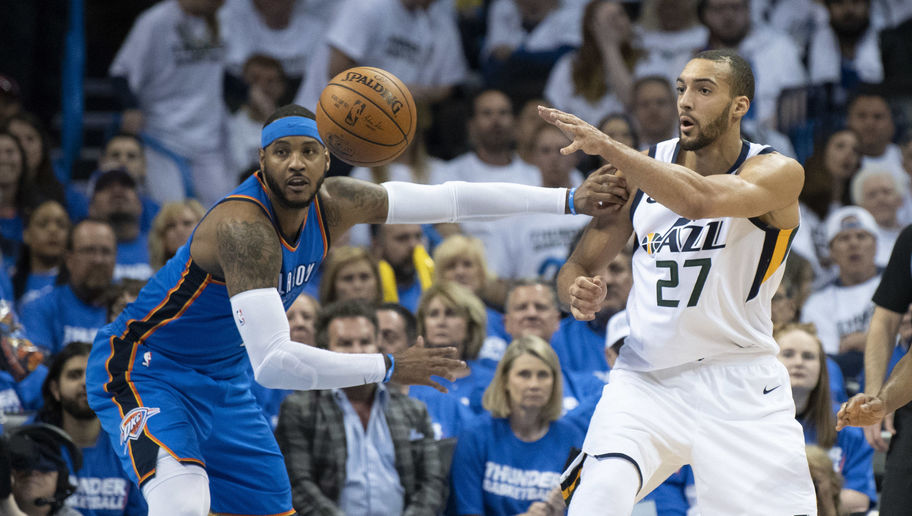 The Oklahoma City Thunder’s season came to an end this past week as the Utah Jazz took their first round series over the Thunder four games to two.  A season that never quite jelled for the team on Reno Street.

A fatal flaw of this latest version of the Thunder was bore out in the final few games of the Utah series.  A coach that has to cower down to his players, trying to make them happy, often times loses sight of the goal of any team,  to win.  That is to win the game, the series, the title.

OKC head Billy Donovan did not put his best team on the floor in many situations this season, and it showed up big in the Utah games. Many head coaches end up doing the same thing as the OKC head, playing players that should be spending more minutes on the bench and not on the floor.  Not every coach is like the man in San Antonio.  Case in point, Carmelo Anthony starting and getting as much or more playing time as the more effective Jerami Grant.

In the two days since the Thunder were bounced out of the first round, Anthony has already said that he won’t come off of the bench moving forward, calling it “out of the question.” Now, he’s taking a step further, saying that the Thunder didn’t have any type of plan regarding bringing him in.

“I think the player that they wanted me to be and needed me to be was for the sake of this season,” Anthony said, per USA Today. “Everything was just thrown together and it wasn’t anything that was planned out. Wasn’t no strategy to me being here, me being a part of the actual system and what type of player and things like that.”

It became apparent that Grant is the post player that gave the Thunder a better defense, a rim protector, and floor runner than Anthony.  This was not only visible in this series but in general during the back half of the season  Anthony is not the player of past. He is a nice piece to have on a team but his next year salary of around $27 million is a killer for OKC.  OKC did not put the best players on the court for many minutes of this series.  This is inexcusable.  And we are going to do the same thing next year Coach Donovan and General Manager Sam Presti, because Melo is calling the shots?  I repeat, this is inexcusable.  This is the road to that leads to getting your pink slip men.

The Thunder have an issue with players that do listen to Coach Donavan’s in game instructions, but tend to do whatever they want while on the court. This disregard of the coach in OKC began with first OKC head man  P. J. Carlesimo, followed by Scott Brooks and has continued with Donovan.  Carlesimo was a hard edged man, demanded much of his young team, and they said, no.  OKC lost games with P.J. not because of his coacing, but of the youth of his young stars.  Presti fired Carlesimo and hired a coach that was going to allow his baby stars to play the way they wanted, grooming them into a title contender.

It all blew up when Presti did not tell James Harden he could start and get max money.  Bad decision Presti.   Harden took his game to Houston where he became the face of the Rockets. I believe he would have stayed in OKC if given the start and the money.  Presti could not keep Kevin Durant.  Then he allowed Westbrook to be the most important man in the franchise, much more than any head coach.

Russell Westbrook and Kevin Durant started this “I will play the way I want”.  Westbrook is now a monster in this franchise.  Decisions have been made lately with Westbrook’s future here in OKC overriding all decisions.

Now we have a star player, Carmelo Anthony, making demands that he is not going to do this or that in the upcoming season.

Player attitude will continue to sink this franchise into first round exits, and an NBA Championship in OKC is just  a “Thunder Way” pipe dream.   A coach is suppose to get one hundred percent acceptance (of his players) from his leadership and that is not happening for the Thunder.  It may never be in OKC.  The player culture has been set, not by the Russell Westbrook’s, or Kevin Durant’s, or even the Carmelo Anthony’s.  It has been set by Sam Presti through his head coaches, and again, we can call it “the Thunder Way”.

This franchise is in a quandary.  Presti has some major decisions to make shortly that will effect not only the Thunder for the next few years with Russell  Westbrook as the star, but the longevity of the head coach Donovan, and in the long of it, the future of himself, as the leader of the Thunder.