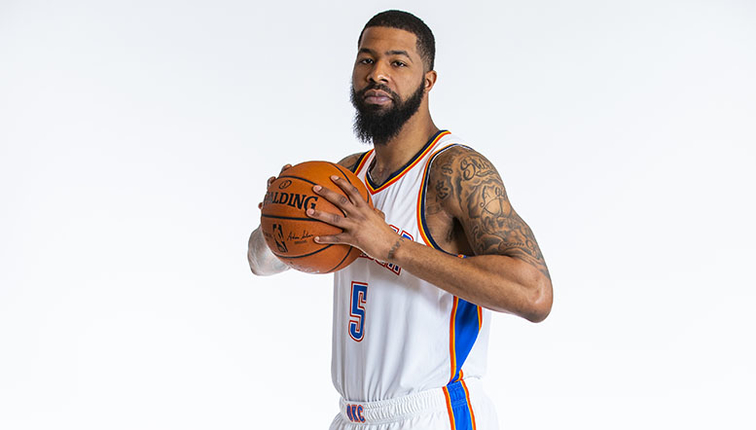 With the addition of power forward Markieff Morris, the Oklahoma City Thunder have added a piece of the roster that could put it just under the Golden State Warriors in the Western Conference pecking order.  Morris, who has played this season with the Washington Wizards before being traded then released by the New Orleans Pelicans will make his first appearance in a Thunder uniform Friday night in the Peak.  Head coach Billy Donavan has said that Morris will be tested in the fire and plenty is expect of him here in OKC.

From the Thunder website Donavan says:  “Markieff has always looked at himself as a defensive-orientated player that can guard a lot of different positions.  He’s got the ability to move his feet and play people on the perimeter and I think he’s got the size, the strength and the physicality to play guys from the low post.”

Needless to say, Coach Donovan, superstars Russell Westbrook and Paul George are excited to have Morris with them.  As ot the OKC thunder and Paul George, ““Kieff is battle-tested. He’s a playoff player,” PG3. “He has that toughness and that experience coming towards the playoffs. So our job for right now is to get him comfortable with us, get him used to the swing of things, our offense, our defense, because we’re going to need him. He’s a bigtime player come playoff time.”

Morris, a grizzled veteran of the Association, is a 29 year old eight year player who played his college ball at Kansas.  From 2013-14 through 2018-19, Morris has averaged between 11.5 and 15.3 points per game in each season and for his career has shoot 45.0 percent from the field, 33.8 percent from three and 77.9 percent from the free throw line while chipping in 5.6 rebounds and 1.7 assists per game, as of the OKC Thunder.

The Thunder also report that “Morris also has the intelligence, physicality, quickness and toughness to guard in the Thunder’s various schemes, whether it be aggressively trapping a smaller ballhandler, switching out onto a guard or banging in the post.”

With Morris, OKC will improve it’s low post play, giving the Thunder a solid big that can bang with other bigs in the league and bring a physical presence that has been lacking when Steven Adams is sitting the bench. Morris, a stronger player than OKC’s first option off the bench for Adams and  other staring big Jerami Grant, will take time from Patrick Patterson and Nerlens Noel. The Thunder shall not be in need in the paint with those five players rotating.

Oklahoma City plays the Utah Jazz on Friday night and follow up with a Saturday night contest with the Sacramento Kings. Both games are on Reno Street in OKC.